The three previous churches — the first was located in what is now Allouez Catholic Cemetery — all suffered devastating fires. The present church was dedicated on Sept. 8, 1912, by Bishop John Joseph Fox, whose parents were married in the original St. John Church in 1847. Bishop Fox served as pastor at the third church during the 1880s.

After the 4 p.m. Mass on Sept. 15, a wine and cheese social, complete with music by a string quartet and tours of the church’s French-made stained glass windows will start the centennial event. Fr. John Girotti, current pastor, will join in on his cello.

“I’m so proud of our parish,” said Fr. Girotti. “It’s a wonderful faith community. And even though we are the smallest parish in the city, we are celebrating our history and the parish is growing. … Because we’re so small, the people know each other. It’s a small town parish in a big city.”

Bishop Robert Banks will join the community celebration for a centennial Mass at 10:45 a.m. on Sunday. A group photo on the church steps will be placed in a time capsule. The Boy Scouts will sell food, a descendant of the church’s architect will speak and a cemetery walk will take place, not in the cemetery, but in the church.

“We’ll do it inside the church because it’s about the church,” said Kevin Rompa, chairperson of the Sunday cemetery event, adding that historical parish figures will be portrayed by current parishioners. “I tried to balance those characters who had impact on the church and those who went on to fame and fortune.”

Those portrayed will include James Crowley, a St. John School graduate who was coached in high school by Curly Lambeau and in college by Knute Rockne. Crowley attended Notre Dame where he became one of the school’s legendary Four Horsemen. Later, he coached Vince Lombardi at Fordham University. Also portrayed will be Lucille Meusel, a soprano with the Chicago Civic Opera, who toured internationally in the 1920s and 1930s. She returned to St. John to care for her parents and was active in the parish until her death in 1985. 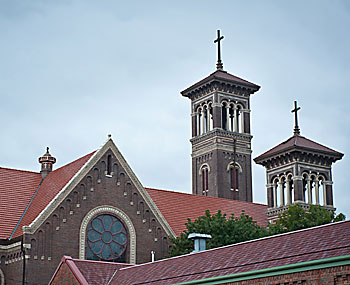 “I talked with somebody whose grandparents knew Fr. Ricklin,” said Schampers, a “lifelong St. Johner.” “He had this stern appearance, but he was not an arrogant person.”

As a model, Schampers doesn’t need photos of Fr. Ricklin. He just has to look at the “Sacrifice of Melchizedek” stained glass window in the church sanctuary. Fr. Ricklin was the model for Melchizedek.

“One of the things I plan on saying (while portraying Fr. Ricklin),” Schampers said, “is ‘I’ve been watching you for 100 years.’ When I was an altar boy — Msgr. Edward Westenberger told us who Fr. Ricklin was and said, ‘He’ll always be watching you.'”

Since 2005, Schampers has been compiling a history on the windows in St. John and he will give brief tours describing them this weekend. The windows were made in Chartres, France, by Charles Lorin. His father, Nicholas, made many of the stained glass windows in St. Patrick’s Cathedral in New York and the styles are similar. (St. John’s windows actually arrived in Green Bay before St. Patrick’s, which were delayed due to the outbreak of World War II.)

All the windows have been restored for the centennial and Schampers said that one that will surely attract attention is the St. Michael window. Not only does it portray the warrior archangel, it also contains representations of both Mont Saint-Michel cathedral in Normandy, France, and the Statue of Liberty in New York. It seems that the Lorins, Fr. Ricklin and the sculptor Frederic Bartholdi were all from the same region of France: Alsace.

Not only the windows were restored for the centennial year, the front doors also sport restored copper. The original faux marble on the church walls — covered with paint and plaster in the 1970s and hand-cleaned, mostly by parish members in 2001 — now show their original designs. The exterior bricks of the Romanesque-style building with its two square towers has been cleaned and tuck-pointed.

There was no way to restore the old Lourdes grotto that was removed in the 1970s, but the main altar and tabernacle contain parts of the original altar and the side altars and the old baldacchino over the altar. Columns from the original side altars — honoring Mary and Joseph — form the front and back of the present altar. The original Stations of the Cross, pews and baptismal font remain and have been restored.

Even the kitchen downstairs is refurbished — mostly by parish labor.

“I was down there with crowbars and pulling out cabinets,” said Barb Strutz, chair of the parish pastoral council and of the anniversary weekend. “Now it’s warm and inviting. It’s like going to your house and standing in the kitchen and talking.”

But perhaps the biggest restorations of the anniversary year have been the two bells in the taller east tower. Their repair was supervised by Bob Klaus, director of building and grounds. A $25,000 bell campaign this spring raised funds for the bells, which, due to deterioration of their carriages, had not been rung for years. Now restored and revamped — they won’t swing anymore but can be struck from inside — the bells will peal regularly, starting this weekend.

Strutz hopes that anyone with ties to St. John comes for the anniversary weekend.

“This building has been here for 100 years and we should celebrate,” she said. “Just think of all the families that have walked through this church. … What better way to celebrate? When you think about it, a lot of families in Green Bay started at this parish. So we should celebrate this girl; she’s been around a long time. She holds a lot of memories.”