“I’ve never been to the shrine, so I wanted to come here. We don’t often feel God in our lives, but this (shrine) is a place where he has come a little bit closer to us,” Van Heuklon said. 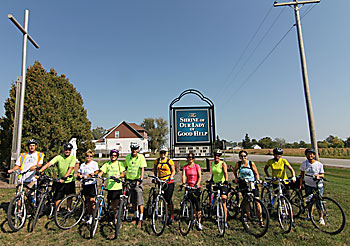 Bicyclists stand outside the entrance of the Shrine of Our Lady of Good Help Sept. 16, following a trek from Kaukauna to Champion. Members of Holy Cross Parish in Kaukauna took part in a pilgrimage to the shrine, some walking, some biking, some motorcycling and some riding a bus. Bishop David Ricken celebrated Mass for the pilgrims upon their arrival. (Steve Wideman | For The Compass

A mile down the road a line of two dozen walkers, clad in blaze orange safety vests not necessary in Adele Brise’s time, approached the shrine.

At the same time, 11 motorcycles, some being piloted by priests and at least one deacon, turned down County Highway K toward the shrine.

The travelers, about 65 in all, were participating in the second annual Holy Cross Parish pilgrimage to the nation’s first and only Marian shrine that is on the site of an approved Marian apparition.

“It’s incredible. It’s so impressive they made their sacrifices to walk all this way so they could bring attention to Christ and the Blessed Mother,” said Bishop David Ricken, whose Dec. 8, 2010, decree formally approved the apparitions and who presided over a special Mass at the shrine’s chapel on Sept. 16.

Bishop Ricken noted the pilgrims were eager to pray “and put their petitions before the Lord.”

“They have this much confidence and faith that they want to join in the sufferings of Christ in order to receive his benefits also,” Bishop Ricken said.

Some of the pilgrims walking the journey over three days, beginning on Friday at Holy Cross, did suffer physically, said Deacon Bruce Corey, one of the originators of the first pilgrimage in 2011.

“Each day there were a lot of blisters and sore muscles, but we had a lot of socializing and camaraderie,” Deacon Corey said.

He noted the walking pilgrimage kicked off on Sept. 14, the feast of the Holy Cross.

“Bishop Ricken worked so hard to get this shrine national recognition. We want to acknowledge that and help the shrine grow,” Deacon Corey said. “We decided to combine the pilgrimage with the feast of the Holy Cross.”

The annual feast day marks the discovery, during a fourth-century pilgrimage to Jerusalem by St. Helena, mother of Roman Emperor Constantine, of the cross on which Jesus died, found during excavations to construct the Basilica of the Holy Sepulcher.

Walkers in this weekend’s Holy Cross pilgrimage, which included participants from throughout the Fox Cities, took turns carrying a small wooden cross on the route that took participants, including cyclists, over country roads and highways and a good portion of the Fox River Recreation Trail into Green Bay.

“Along the way we prayed the rosary and the Angelus, just different things. You saw people stepping out of their box a lot of times, becoming leaders and growing in their faith,” Deacon Corey said.

“I was at the bishop’s residence with someone who was interested in the seminary when Bishop Ricken said to me, ‘Oh. You’re the one who organized that shrine walk last year. I want to be there this year to do a Mass for you,'” Deacon Corey said.

This year’s walk was expanded to include a bicycle route as well as a day trip for motorcycle riders and the bus trip for the elderly. “We prayed at every rest stop. We bonded as a group,” said Mary Ebben of Kaukauna, an organizer of the bicycle ride.

A stiff tailwind — some cyclists speculated blew with divine intervention — helped riders conquer some challenging hills while whisking them along the paved roads and trails.

“We definitely felt we were on a pilgrimage. Everyone had special intentions they were doing the bike ride for,” said Ebben, who rode and prayed for a relative who suffered serious brain injury in a snowmobile accident.

Ebben, who walked in 2011 and walked the Friday leg of this year’s pilgrimage, said the bicycle ride, attracting 11 riders, was added as an option for pilgrims who could not afford to take three days off from work or home.

“We felt there should be some other means of transportation. People really jumped on board. A lot of people are cyclists these days,” Ebben said.

Deacon Corey said many participants connected with people living along the routes.

“When we felt people needed a break we would go ahead and ask farmers if we could rest under their shade trees. Nine out of 10 people say ‘Go ahead,'” Deacon Corey said. “There were bonds, relationships created. You could see the spirit moving in everybody.”

He hopes the pilgrimage grows into a regional event with Holy Cross Church as its starting point.