Putting life back together after pornography shatters it

RECLAiM Sexual Health is a Catholic-based online recovery program for people addicted to pornography and other unhealthy sexual behaviors. It was launched by Elizabeth Ministry International at the request of Bishop David Ricken. 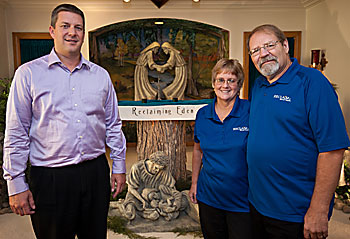 Bruce and Jeannie Hannemann, founders of Elizabeth Ministry, which offers support to women and families through the years of pregnancy and childhood, accepted Bishop Ricken’s appeal to start RECLAiM shortly after his arrival in Green Bay in 2008.

“He was very excited about Elizabeth Ministry, but in that conversation he asked us to expand the ministry to what he referred to as the two bookends,” Jeannie Hannemann told The Compass. “We were focused on child-bearing issues. He said he would like to pick up sexuality and relationships to kind of bring that all together.”

Bishop Ricken saw that the scourge of pornography threatens marriage and families, something the Hannemanns knew firsthand. Bruce had been addicted to pornography and recovered.

“(Bishop Ricken) thought that was very important that we actually bring our story out, to give other people not only an understanding of how deeply rooted (pornography can be), but also that there is hope and help to be able to recover from this and to lead a normal, healthy lifestyle,” said Bruce.

The Hannemanns explained that Bruce’s addiction, which began as a child, took a radical turn when his father, who had introduced him to pornography, died in 2000. “He went downhill fast,” said Jeannie, “to the point where he lost so much of his ability to communicate with people.”

When the root of Bruce’s changing behavior was discovered, the Hannemanns searched for treatment.

“I tried in-house treatment centers and therapists,” said Bruce. “What really finally started to make a change in my behavior was this secular program online called Candeo.”

Known as The Candeo Way, the program helps change behavior by “using revolutionary discoveries in brain science,” according to its website, candeohealthysexuality.com.

Jeannie came across the Candeo website while doing research on brain science in the field of education.

Candeo “took what they called the brain science of change and applied it to pornography addiction,” said Jeannie. “It was amazing.”

Don Warden, who joined the Hannemanns last January as operations and development director of RECLAiM Sexual Health, said that sexual addiction, like alcohol or cocaine, is a chemical addiction.

Citing information from the Candeo website, Warden said that exposure to sexual images releases chemicals in the brain, aiding in the formation of new brain circuitry. The Candeo online program re-maps a person’s brain circuitry, helping to break old habits.

After hearing Bruce’s story, Bishop Ricken asked the Hannemanns to begin a ministry based on the Candeo model. “He put this (ministry) on the diocesan website with a link (to the Candeo website) and had us create some Catholic support to go around it,” said Jeannie. The Catholic focus was based on Pope John Paul II’s theology of the body, which complemented the scientific angle. They also traveled around the country giving workshops on addiction and treatment.

Two events occurring around the same time heightened the visibility of their ministry. First, representatives of Candeo contacted them. The company was tracking their website visits and found a high number of links coming from the Green Bay diocesan website.

“That became an amazing opportunity to share the teaching of the church on theology of the body” with the Candeo staff, said Jeannie. “So we went to train their whole staff and they saw what a beautiful gift this was.”

Today, Mark Kastleman, co-founder of Candeo, serves as director of education and training for RECLAiM.

The other event was the publication of Bruce’s story in the Appleton Post-Crescent in January 2010. A reporter asked the Hannemanns if she could share Bruce’s story.

“We were still private and nobody knew our story,” said Jeannie. “We asked the bishop, because he had walked with us through every step and he said, ‘You need to go public with this’ and we said, ‘No we don’t.’

“We went for two months back and forth with him until we agreed,” she added. The story appeared on the front page of a Sunday paper.

“We went to Mass on a Saturday night because we didn’t want to face the world ever again,” said Jeannie. On Sunday morning, Bruce bought two copies of the paper and brought them home. “We both sat reading, going, ‘We are never leaving this house again.'”

On Monday morning, they discovered the story’s real impact.

“The cars were lined up on both sides of the street waiting for us,” said Jeannie. The first couple they met told them about the husband’s struggle with pornography and prostitutes.

“They had tried to get help within the Catholic Church, but there wasn’t any help for them,” said Jeannie. They got help at an evangelical church.

“The first thing the wife said was, ‘Thank God my church is finally doing something.’ They talked about how much they missed the Catholic Church, so they came back into the church again and it really solidified for us, this is a program of the Catholic Church. This isn’t just Elizabeth Ministry.”

“They had a program before that was science and psycho-education based and now we are basically weaving this Catholic thought that was supporting it,” said Warden.

After a year of work, the Catholic website, www.reclaimsexualhealth.com, launched in May 2012.

Fr. Sirico, founder of the Acton Institute, was spiritual advisor for a few people participating in the Candeo program. “He started taking some of the principles of the brain science of change and applying them to all kinds of sins in the confessional,” said Jeannie. “He contacted the company and said, ‘Can I have permission to somehow put more formally (instructions) together to teach my fellow priests how to teach people the brain science of change?’ So they introduced him to us.”

Fr. Percy, an Australian priest, is author of “The Theology of the Body Made Simple.” The Hannemanns were introduced to Fr. Percy, who agreed to help create content for the website.

“About a year’s worth of work went into really creating the Catholic version with a lot of wonderful people,” said Jeannie.

Bruce is grateful to have recovered from addiction and thankful he can now help others.

“I work with a fair number of men who have this problem,” he said. “The biggest thing that everybody has is shame and secrecy. They don’t want anybody else to know about it and they are so ashamed of where they are at.” 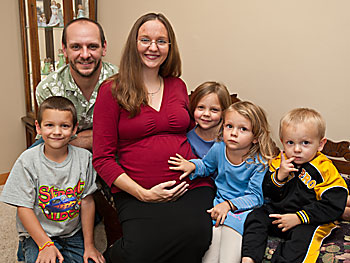 Chris and Carlene Martens are pictured with their four children, David, 7, Autumn, 4, Lilly, 3, and Austin, 19 months, in their home. Carlene is expecting their fifth child in December. Chris and Carlene have received support from RECLAiM Sexual Health following Chris’s termination from work for his pornography addiction. (Sam Lucero | The Compass)

Couple get help from RECLAiM

Chris Martens said shame and secrecy filled his life for years. “I put up barriers not wanting help, but wanting help at the same time because I was so afraid of revealing who I was on the inside,” he said. Through RECLAiM, “… Now I’m starting to peek my head out at the world, starting to engage the world versus being hidden in this secret world where it’s all fantasy and all fake.”

Carlene said support for spouses is an important part of RECLAiM.

A friend introduced, Carlene to Jeannie soon after she left Chris. Hannemann was forming a support group for women hurt by these problems.

“Just being able to talk to women who have had similar experiences — some of them, their husbands had a physical affair, but for most of us it was the pornography issue — we were able to really connect,” she said.

Three weeks after moving out, at the suggestion of Jeannie, Carlene moved back home. Chris had enrolled in a 12-step recovery program and Carlene introduced him to RECLAiM.

“(RECLAiM) gives me a baseline program of going through and analyzing my defective thoughts,” said Chris. “Is this something I want in my life? No, because it doesn’t help me, my wife or my children. It’s part of the human experience (to have impure thoughts), and I can choose to replace that with positive thinking, which makes me feel good. It’s that positive feeling that replaces that negative behavior.”

The Martens, members of St. Francis Xavier Cathedral Parish, say their faith in God is now helping them move forward. On Aug. 7, 2011, their seventh anniversary, they renewed their marriage vows.

“If we are supposed to be together, we need to renew our vows because you didn’t mean the ones you made to me, so they are invalid,” Carlene said she told Chris.

Chris, who said his faith was “kind of a good show to put on” before his addiction was discovered, now says his belief in God helps him understand that “no matter how bad things are, how horrible the world is, there’s always something better. … This is a lifelong journey for me. I’m going to be journeying towards always trying to find God’s peace.”

His advice to other men who struggle with pornography: “Break the isolation. There are so many resources and it only takes a little bit of grace from God to ask for help and your world can be turned around.”