“In those countries, they lack the basic necessities of life: food, clothing, medicine. Items we take for granted — and it’s very hard to evangelize if people are starving and have nothing,” Br. Regis told The Compass Sept. 5. 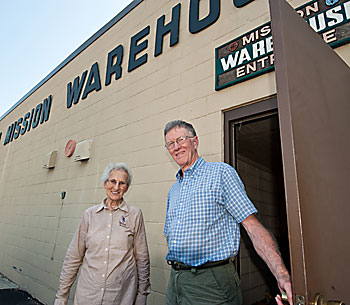 Sr. Dora Zapf and Br. Regis Fust are pictured at the entrance of the Salvatorian Mission Warehouse in New Holstein, home of a volunteer operation that collects and distributes food, clothes, medical supplies and other items to mission outposts around the world. (Sam Lucero | The Compass)

“So taking care of their material and physical needs, showing Christ-like love and concern for their basic needs, makes it much easier to do the missionary job of evangelizing,” he explained.

Br. Regis, who celebrated the 60th jubilee of his profession of vows with the Society of the Divine Savior last March, began the mission warehouse ministry in 1963. Its genesis came after a request from his sister, a Salvatorian nun who worked at a hospital in Columbus, Wis. “She wanted to know if some (hospital items) might be of use to the missions,” said Br. Regis.

Through contacts with Salvatorian missionaries in Tanzania, he had a shipment sent to a Salvatorian-run hospital there. Other shipments followed and a few years later, the international mission project had begun.

Salvatorian Sr. Dora Zapf co-directs the mission operation. She worked at a boarding and day school in Dar es Salaam, Tanzania, before joining Br. Regis in 1974. Among her duties is supervising the volunteer staff. “She was on the (receiving) end in Tanzania,” said Br. Regis. “She saw this stuff coming in and helped distribute it. … So she was familiar with what was going on here.”

What goes on at the Salvatorian Mission Warehouse is no small feat.

Inside the 25,000-square-foot warehouse, located on the city’s outskirts, crates and boxes of goods donated by clothing, food and medical supply companies are unpacked, sorted and repacked by a small army of volunteers. Each week, one or two shipping containers are loaded by volunteers and transported by semi-trailer to Chicago. From there, trains carry them to shipping ports in numerous states along the East Coast for their final destination.

Working closely with Catholic missionaries around the world, the goods are shipped to mission sites in 12 countries in Central America, South America, East Africa and West Africa.

The operation has been successful, said Br. Regis, because the Salvatorians know the missionaries they are helping and know the goods being shipped will make it to those who need it.

“We know how to get the supplies to the missions,” said Br. Regis. “You’ve got to have somebody on the other end who knows what they’re doing and knows how to get it out and distributed.”

Success is also credited to the staff of more than 250 volunteers from around northeast Wisconsin. Many of them, like Rosella Bruckner, 95, have been volunteering for decades. “It’s just something to do, to get out of the house,” said Bruckner of Kiel, a volunteer for 40 years.

The entire staff, including Br. Regis and Sr. Dora, serves on a volunteer basis, which assures all monetary donations go to the cost of shipping donations as well as the cost of purchasing food supplies such as rice and wheat.

In late August, the mission warehouse purchased 120,000 pounds of cornmeal from Semo Milling in Scott City, Mo. The 24,000 bags of yellow cornmeal were shipped directly to missions in Tanzania and Ghana at a cost of $2,400.

When she received word of the pending shipment, Sr. Matilda, general superior of the Handmaids of the Divine Redeemer religious order in Accra, Ghana, emailed Br. Regis. “We Handmaids are starting an orphanage … and we will house all our orphans at one place. The cornmeal will be a great source of help for us. We wait for its arrival with gratitude to you and the team,” she wrote.

Letters of thanks are common and they help inspire volunteers and donors. “We read the letters that Br. Regis puts out and you get to meet some of these people” who receive the donated goods, said Bruckner. “It’s a good thing. It’s a very good thing.”

Next year the Salvatorian Mission Warehouse will observe its 50th anniversary. While it’s a time to celebrate, Br. Regis and Sr. Dora are also introspective. At ages 80 and 77, respectively, they don’t know how much longer they can continue their ministry and there are no successors in sight.

“It’s been a concern for 20 years, but it is getting a little more urgent,” said Br. Regis. “We have new superiors in Milwaukee and I’m hoping that we get a chance to sit down and talk more specifically about this.”

Additionally, times have changed in the world of charitable giving, which means fewer corporate donations.

When he began the operation, Br. Regis said companies were very enthusiastic about offering assistance to the missions. Today, with corporate mergers and tighter budgets the spirit of philanthropy seems to have waned.

“It’s harder and harder now, as companies get bigger and more distant,” he said. “It’s the heart and soul missing in those companies,” Sr. Dora added.

A new challenge is the “dollar store” companies. “They are popping up all over the place,” said Br. Regis. Companies like Proctor and Gamble, which was once a major donor of personal hygiene items such as soap, shampoo and toothpaste, now sell what was once given to the missions to dollar stores.

“They are hurting their own business,” said Br. Regis. “If it’s available at half price in the dollar stores, people are not going to buy it in the drug store.”

Another hurdle in the distribution chain is getting supplies into countries due to government bureaucracy, said Br. Regis.

“We’ve done Paraguay for 35 years and all of a sudden, on our last shipment, the Paraguayan embassy in Washington, D.C., said they need notarized stamp seal certificates from the chamber of commerce of New Holstein. Why? They never needed it before. So it’s becoming harder to help the missions because of governments.”

He said the warehouse has traditionally found the best business partners through word of mouth. “Early on we found out that 95 percent or more of our contacts have come from somebody who knew somebody,” he said.

For example, he said, back in 1988, a story about the mission warehouse was published in Catholic Digest and a woman who worked at Land’s End contacted the company’s vice president, who was looking for a project to support. Since that time, Land’s End, a clothing manufacturer based in Dodgeville, Wis., donates two semi-trailer loads of clothing each month.

The greatest needs facing the Salvatorian warehouse are donations to help pay for shipping of materials and donated goods from businesses, said Br. Regis, noting that 99 cents of every dollar donated goes to program expenses. “People should think where their sons and daughters work and if there is something available” to donate, added Sr. Doris.