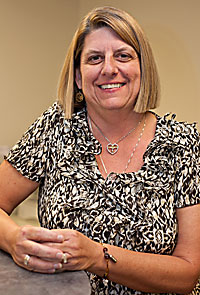 Prior to joining the diocesan staff, Stefanic served 17 years as a psychotherapist. She wasn’t looking for new employment, but checked out a listing for another position at the recommendation of her former college classmate, Norbertine Br. Steve Herro. The assistance coordinator posting on the website caught her eye.

“I saw this position listed and it jumped out at me,” she said. “I thought that this could be somewhere I could use my experience and I felt God was calling me to it.”

In her work as a psychotherapist, Stefanic assisted people dealing with pain, including victims of sexual abuse and some perpetrators. A personal experience also drew her to the position. Seven years ago, a friend revealed that he had been sexually abused as a child by a priest.

“I’ve walked that emotional journey with him and I wanted to be able to assist others walking that journey,” she said. “I see how it affects his marriage, his family. It affects more than the victim.”

The diocese is in its 10th year of implementing the USCCB’s Charter for the Protection of Children and Young People. Stefanic, who succeeded the recently retired Ann Fox as assistance coordinator on July 9, said that the average person likely doesn’t see what the church has done to protect people.

“They don’t see the education, the background checks, the real work behind the scenes to ensure a safe environment,” she said. “They just see what’s in the media, the lawsuits. Every employee, every volunteer who has any contact with children or vulnerable adults has to go through a VIRTUS ‘Protecting God’s Children,’ program and pass a thorough background check.”

Since 2003, the diocese has offered 1,247 VIRTUS training sessions attended by 28,813 employees and volunteers.

When someone reports abuse, the diocese reports it to the civil authorities, explained Stefanic.

“We encourage them to report it themselves, as a firsthand report is the most accurate,” she said. “They can have their name withheld if they so choose, but every call, every report goes to the civil authorities, even if it’s 30 or 40 years old.”

The average person will bury it 20 to 30 years as they cope with feelings of shame, confusion and guilt. Waiting many years to report abuse is common, added Stefanic.

A meeting with Bishop David Ricken is offered to those who come forward.

“Bishop Ricken will compassionately listen and offer an apology on behalf of the church,” said Stefanic. “For most victims, that is a crucial step in their healing.”

While it’s difficult seeing people in pain, assisting them on their journey is rewarding, she added.

“It’s very humbling that they put that trust in me, share their story and allow me to walk with them,” she said. “Compassion is the big key, that compassion in the name of Christ.”

Stefanic, a Marinette native, entered a volunteer youth ministry program in Washington, D.C., following graduation from St. Norbert College. She was working at a parish in the nation’s capital when Cardinal James Hickey, archbishop of Washington, D.C., awarded her a scholarship to attend The Catholic University of America, where she earned a master’s degree in social work.

“My intent was to do social justice work for the church,” said Stefanic. “I had an internship with the Archdiocese of Washington, D.C., to start social justice programs in parishes.”

Stefanic was then hired by a church in Texas to do social justice work and youth ministry, but last minute decided to move back to the Midwest to be closer to family. She accepted a youth ministry position at St. Isidore Parish in the Diocese of Joliet, Ill. The parish had 6,500 families at the time.

“It was very active,” she said. “We had a lot of young people. We used to take six to eight buses at a time to Great America.”

Stefanic met her husband, Alan, at the parish. He served as the maintenance supervisor. While directing youth ministry, she also worked for an agency as a crisis intervention specialist for runaways and locked out youth.

A return to Wisconsin grew out of an ad discovered in the Chicago Tribune. They found a cottage for sale on the water in Marinette, and after praying about it, decided to make the move to be closer to her parents. Alan used his carpentry, electrical and other skills to build a “beautiful home around the cottage.”

Jayne and Alan, members of Holy Family Parish in Marinette, have a son, Alan Jacob, 18, a freshman in college and pontifical server (altar server to the bishop) for the diocese; and a daughter, Joelle Elizabeth, 15. The couple lost two children, Jared Joseph and Adina Marie. “I have two in heaven looking over us,” said Stefanic.