“It was the first match of the season,” explained Halla, who a year ago finished second at state in Division 2 doubles. “He crushed four of my racquets. We were playing Notre Dame, Xavier and University School the next weekend and that was going to be the toughest match of the whole year. I was thinking, ‘I don’t have my racquets!’”

Halla and her teammates now laugh about the incident. They joke about how her phone escaped damage. Roncalli is enjoying a successful season having wrapped up the Eastern Wisconsin Conference crown. The veteran squad features eight seniors including returning state qualifiers Halla, Elizabeth Kuenzi, Emily Halvorsen and Catherine Taddy. The goal is to become the second team in school history to advance to team state. 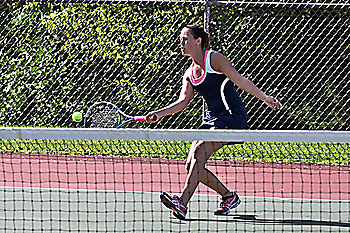 “I’m sure we all want our own success, but it’s not just about you,” said Kuenzi, Roncalli’s number one singles player and a three-time state participant. “It’s about the team. Even if you win individually, it’s still not as much fun or as neat of a success if the team doesn’t win.”

Experience is helpful, but it also creates expectations, added Kuenzi, who also plays softball at Roncalli and is a competitive figure skater.

“You are more familiar with your environment,” she said, “but there is possibly even more pressure because you want to do better than the year before because you’ve been there before.”

Halvorsen, the team’s number two singles player, is also targeting a fourth trip to Nielsen Tennis Stadium in Madison, home of the state tournament. She played doubles her first two years before moving to singles as a junior. Halvorsen teamed with Halla as freshmen.

“The first time, there were no expectations,” she said. “It was a new thing. I remember thinking, ‘This is awesome.’ Each time you feel that, but it’s nothing like the first time.”

“Our first (state) match, we got there and won,” said Halla. “It was so much fun. You have a good point and the whole place cheers and you know they are cheering for you. It’s still an adrenaline rush.”

Halla missed her sophomore year due to a torn anterior cruciate ligament in her knee suffered while skiing. Following nine months of rehabilitation, she returned to partner with Jane Salutz, a senior on last year’s team.

“Coming back, I didn’t know how things were going to go,” said Halla. “There was a moment when Jane and I were in the hotel before the final matches and we both said, ‘Can you believe it? The worst we can do is fourth place.’ We were amazed that we got that far. I hope to go all the way this year, but I think I will be happy with whatever happens.”

Halla is teaming with freshman Tallie Piaskowski this season to form one of the top doubles teams in the state.

“It’s a lot different than last year, but both of my partners have really good qualities that definitely help me,” said Halla. “I’m trying to pass on some of my knowledge and Tallie is doing a great job so far, especially considering that she’s a freshman. Communication is huge. If we didn’t talk, we wouldn’t be anywhere near the team we are. We always have to know what the other person is going to do and what their plan is in a match.”

On the singles side, Kuenzi and Halvorsen regularly play against each other in practice and push one another. Kuenzi is more of a power player who hits more winners. Halvorsen is consistent in the serve and volley game. They both realize the significance of possibly qualifying for state each of their four years.

“Not many people can say they made it there all four years,” said Kuenzi.

“It’s a huge accomplishment,” said Halvorsen. “It’s always been a goal since I’ve been a freshman. My large goal is to get on the podium (top six).”

Roncalli is coached by Mike Halla, Abby’s father, who achieved a milestone of his own this season. He recorded his 100th dual victory as a coach when Roncalli defeated Madison East at the Middleton Invite. The girls got him a cake, balloons and created a special trophy to mark the accomplishment.

“We had a clear base and we signed our own tennis balls that we played with that match,” explained Kuenzi. “We put the tennis balls in the base. That it made it look like a trophy and we presented it to him. It was fun to be a part of it.”

The seniors all serve as captains and lead prayer before each match. The night before a match, the entire squad gathers together for dinner. Ice cream stops on road trips also help them bond. They like to have fun as a group, even at practice.

“Our practices are very enjoyable,” said Halla. “They are tough, especially our conditioning, but we are all going through it so it makes us closer.”

“We like to listen to music,” said Halvorsen. “We are a musical team. We are not the best singers, but we have fun with it.

“Our team is way more than big matches and getting to state,” she added. “We’ve become like a family.”