“She has bright red hair and bright skin, and she is going to be a credit to many people.” These prophetic words that described his unborn granddaughter, Alveda Celeste King, prevented her own mother from having an abortion. 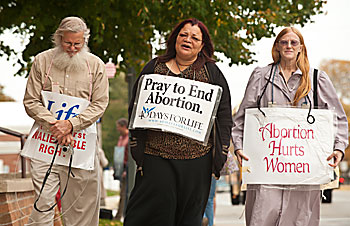 Alveda King, niece of the late Rev. Martin Luther King, Jr., takes part in the 40 Days for Life vigil Oct. 4 outside of the Medical Arts Building in Green Bay. She joined marchers outside the abortion clinic while on a two-day visit to Green Bay. Also pictured are Jerry Slavik, left, and Dr. Amy Roesting. (Sam Lucero | The Compass)

Later, King would have her own terminated pregnancies, one of her own free will, and one performed by a doctor without her consent. Eventually, as a mother, she would be instrumental in talking three of her own children into keeping their unplanned babies.

Having come full circle, King now sees the connection between the civil rights struggle in which her family had been so deeply rooted and the pro-life movement of today, echoing her late uncle’s famous words that “injustice anywhere is a threat to justice everywhere.”

“If the dream of Dr. Martin Luther King, Jr., is to live,” she stated in written testimony, “our babies must live. Our mothers must choose life.”

As a pastoral associate and director of African-American Outreach for Priests for Life and Gospel of Life Ministries; Silent No More Awareness Campaign spokesperson; member of the National Black Pro-life Coalition; and best-selling author, King is in high demand, and her visit to Green Bay was three years in the making.

Christina Pallini, director of The Power of Life, Inc., a nonprofit ministry, was introduced to King in 2009 during a Priests for Life directors’ conference. “I was impressed by her beautiful humility,” Pallini said. “From that moment, I’ve always wanted to bring her. The reason we are so thrilled to have her here is she speaks from experience. … From someone who knows, because she’s lived it.”

“She really brings a human face to such an abstract debate,” said Gietman. “She brings humanity to the table and that’s really great — sharing personal stories about her own abortions, and her own family life and how she’s lived the pro-life message in all of those circumstances.”

In relation to the upcoming elections, King emphasized that there are state, county and even city candidates to support, and that it’s not just about choosing one political party versus the other. She also stressed the write-in option.

King acknowledged President Obama’s strong backing by both the African-American and Catholic communities in the previous election. She noted that there are some in those communities today who are encouraging people to refrain from voting altogether. King explained that this is not the answer.

“People died so that people could vote,” she said, adding that the right to vote is not only a privilege but a responsibility.

King noted there will be work to do beyond November. “No matter who’s elected,” she said, “don’t be discouraged. But December’s coming. January, February, March. … We’ve got other days ahead. And we have to be encouraged. We must give our all.”

Wednesday’s reception was one of four engagements with King, which included a women’s luncheon on Thursday that was open to the public and attended by approximately 130 people. King also spoke at two private events with community leaders and prayed outside at the Medical Arts Building at Bellin Hospital on Thursday afternoon as part of the 40 Days for Life campaign.