When the Belgian immigrants arrived in the Sheboygan area, they discovered that the good land was taken, so they moved near Dutch settlers in the Kaukauna area. The death of a child of Phillip Hannon led them to St. John the Evangelist Church in Green Bay for the funeral. Fr. Edward Daems, a Belgian priest who was visiting St. John, advised the group to settle 10 miles northeast of Bay Settlement where they bought land for $1.25 per acre. 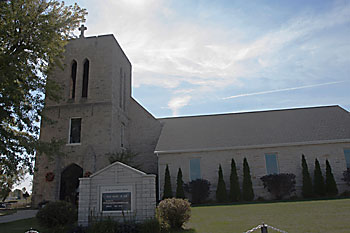 St. Joseph Church in Champion. The parish will celebrate the 150th anniversary of its dedication on Oct. 6 with a Mass celebrated by Bishop David Ricken. (Rick Evans | For The Compass)

The area was first called Grez-Daems in the priest’s honor. It would later be known as Robinsonville after Charles D. Robinson, editor of the Green Bay Advocate, an early newspaper. By the turn of the century, the community became known as Champion, named for a town in Belgium.

St. Joseph Parish predates the Diocese of Green Bay, which was founded in 1868, so petitions to build a church were directed to Milwaukee. A log church was built in 1862 on five acres of land donated by Jean Joseph Delveaux. It was named St. Joseph in honor of the patron saint of Belgium. Fr. G. Wilkens was the first pastor.

The parish grew steadily as evidenced by a recorded 211 baptisms in the first 15 years. The original log church was destroyed by fire in 1877. Fortunately, Fr. Eramus Eusebius Leccia had started plans for building a new church shortly after he arrived in June of 1874. He deemed the old church too small to accommodate the congregation.

A disagreement about where to build the new church arose between the Flemish and Walloon Belgians. The Flemish Belgians ended up building their own church on the site of St. Martin Church, Tonet, without episcopal approval. The Walloons rebuilt St. Joseph on the original site.

When Fr. Lambert Broens became pastor of St. Joseph in 1894, it marked the beginning of 90 years of service to the parish by the Norbertine fathers. St. Joseph at the time was a mission of St. Martin, (Tonet) Martinville. Norbertine Fr. Milo Peter Smits became pastor at St. Martin and St. Joseph in 1908. He was the longest-serving pastor in the 150-year history of St. Joseph. Fr. Smits served the faith community for 43 years. The church was rebuilt in 1936, at which time Fr. Smits, known for his gardening skills, landscaped the grounds. He also built a grotto between the church and rectory, had a fish pond and raised pheasants.

Nobertine Fr. Eugene Berendsen succeeded Fr. Smits and served at St. Joseph for five years. A new electric organ was installed and the heating units at the church and rectory were converted to oil while he was pastor.

Fr. Francis (Frank) Kerscher, a diocesan priest, became pastor at St. Joseph in 1984. He was succeeded by Fr. Florian Resheske in 1989. In 1992, St. Joseph was linked with St. Kilian, New Franken. Fr. Resheske moved the rectory to New Franken. The St. Joseph rectory was converted to a parish center. In 2002, under the leadership of Fr. Milton Suess, pastor, a new social hall was built at St. Joseph.

The 150-year history of the parish is chronicled in a 110-page anniversary booklet. The effort was spearheaded by Bob and Jeannette Dubois, who chair the anniversary committee. Booklets will be available for a donation.

“It’s remarkable to think about how the Belgians left their home to start a whole new way of life and how they kept their faith,” said Bob. “I hope people remember the sacrifices that were made by so many people over the years.”

Sally Rabas has been a member of St. Joseph since baptism. She recalls the changes in the Mass.

“I remember the Communion rail,” she said. “There was also a time when we went to church and everyone seemed to have their own pew. It isn’t that way anymore. I like how everyone now takes part in the Mass. Everyone sings.”

The parish cemetery, located on the grounds, is a special place. Rabas said her grandparents are buried there. “It’s a very nice, clean cemetery.”

Bev Paye, the parish sacristan, and her husband, Harold, have been members of St. Joseph for 61 years. All five of their children were baptized at the church. The couple has 11 grandchildren and eight great-grandchildren. Paye said that she is looking forward to reminiscing at the anniversary celebration.

“I’m looking forward to seeing some of the older folks who come back,” she said. The altar stands out as one of her favorite parts of the church. Following Vatican II, the traditional look of the altar was maintained compared to some other churches, she said.

The Champion area is growing, which helps the life of the parish, added Paye. “We have a lot of young families. We had 22 children for our Sunday program.”

Fr. William O’Brien, who in July of 2010 was appointed pastor at St. Joseph, along with St. Kilian and St. Thomas the Apostle, Sugar Bush, said he is thankful to be a part of the anniversary celebration. He described the parish as “one of the alive country parishes in the diocese.”

“I’m sure happy for the people here,” he said. “It’s a close-knit faith community with around 400 families. There is a great history here. We have some parishioners whose parents, grandparents and great-grandparents are buried in the parish cemetery. That’s a real tribute to their faith.”

Fr. O’Brien hopes that there is an awareness among parishioners of the significance of the 150-year milestone.

“I hope there is witness of the deep perseverance and struggle, the mystery of all things,” he said.

Vic Kapinos contributed to this story.