Allowing a moment of silence to slip between the final pair of chords, Fr. Carmel turns his face toward the camera. As the final notes fade to a graceful end, Fr. Carmel’s expression gives a hint of his own desire to come back — not to Sorrento, but to his home in the United States. 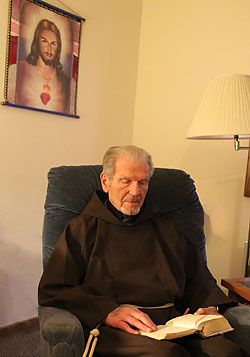 Capuchin Fr. Carmel Flora is pictured in his apartment at St. Fidelis Friary in Appleton. Fr. Carmel retired and moved to Appleton recently after serving the Capuchins for 43 years in Australia. (Sam Lucero | The Compass)

After 43 years serving God in Australia, 30 of them in Brisbane at the edge of the famed Australian Outback, Fr. Carmel, carrying a reputation as a brilliant musician and wise religious leader who developed the country’s successful priestly formation program, was ready to come home.

“I’m no longer needed in Australia. We are getting vocations to the Capuchins,” Fr. Carmel said Oct. 18, the day after a 9,500-mile flight from Sydney, Australia, to his retirement home at St. Fidelis Friary on Appleton’s east side.

Fr. Carmel, 86, told of living in Australia for more than four decades, teaching hundreds of seminarians, of growing up in a musical family in Harlem, his unusual call to serve God, living in fear for his life during the 1967 race riots in Detroit and, most importantly at this time in his life, the absence of a piano to practice.

“When I lived in Australia I practiced on the piano for an hour each day,” Fr. Carmel said. “I like St. Fidelis, but the only piano they have is in the chapel. I hate to be banging on the chapel piano. You can hear it all through the house. I’m looking for a place to practice, maybe a school or church. That (practicing the piano) would be my greatest enjoyment. I love playing the piano, improvising and such.”

An ordained priest for 60 years, Fr. Carmel was born and raised in Harlem, a neighborhood in Upper Manhattan in New York City, not far from East Harlem, known for its Italian population.

“My name was Rudolph Jeremiah. They called me ‘Rudy. Rudy Flora.’ What a change to Carmel,” Fr. Carmel said with a clear Brooklyn accent.

The youngest of four sons and two daughters of Italian immigrants from Salerno, Fr. Carmel said he came from a musical family.

“My father played the mandolin in the gay ’90s. My mother, Carmela, was a good singer. All three of my brothers were professional musicians. They would practice all day and work at night, sometimes until 2 a.m.,” Fr. Carmel said.

Fr. Carmel thought he might be headed toward a career in music until one day, when he “got the call” while a senior at Peter Stuyvesant High School.

“I was getting ready for graduation and looking for a college. This one day I went to confession at Our Lady of the Angels Church. It was an old German priest with a long beard and a very loud voice. He couldn’t speak softly,” Fr. Carmel said. “When I finished confession he shouted ‘Did you ever think of becoming a priest?’ I had gone to Catholic grade school, but never seriously thought about becoming a priest.”
Fr. Carmel went home and thought about his calling for a couple days before returning to the church.
“I met another old German priest and told him I was interested. This priest with the loud voice really struck me. That’s how God works sometimes, in mysterious ways,” Fr. Carmel said.
The priest put Fr. Carmel in contact with the friars at St. Lawrence Seminary at Mount Calvary near Fond du Lac. He recalls his novice master asking what name he would like to take.
“I wasn’t sure what name to take. He said ‘Why don’t you take the name of your mother, Carmela?’ I thought that sounded OK,” Fr. Carmel said.
After a year at St. Lawrence Seminary and several more years at a seminary in Indiana, Fr. Carmel was ordained a priest on Oct. 9, 1951.
“My first job was teaching seminarians in Huntington. I stayed there four years,” he said.
Fr. Carmel then transferred to St. Francis Parish in Milwaukee. “I was the superior and helped in the parish. I also did some preaching,” he said.
By 1967, Fr. Carmel was working out of a monastery in Detroit, when a police raid on an unlicensed bar grew into one of the country’s worst race riots.
“We couldn’t go out of the monastery. There were tanks on the streets. Can you believe that — tanks on the streets of the USA? They shook the house they were so heavy. It was like a movie with the tanks swiveling their big guns all around ready to shoot. There were gunshots every night. We all just prayed. It must be a lot different now,” Fr. Carmel said.
In 1969, Fr. Carmel and four other Capuchins were asked to go help develop a formation program for the priesthood in Australia.
“We all said yes. I was ready to go wherever I was sent. The other four returned to the United States after three to 12 years. I just kept going for 43 years. I guess the Lord wanted me to work there,” Fr. Carmel said.
During his lengthy stay in Australia Fr. Carmel said he did “all sorts of priestly work,” in the process becoming the Australian Capuchin’s longest-serving provincial.
Fr. Carmel worked to build a formation program for priests and build a steady stream of seminarians to fill a perennial shortage of priests in Australia.
“Australia has a priest shortage just like everywhere else,” Fr. Carmel said. “They have trouble getting commitment to vocations.”
Fr. Carmel worked in numerous parishes, mostly in the Sydney and Brisbane areas and occasionally in Perth on the far western edge of Australia.
Driving to Perth would have required passing more than 500 miles through the Great Victoria Desert.
“You always heard stories about people getting stuck in the desert and having to wait and wait and wait for another car to maybe come along and then hope they could help you,” Fr. Carmel said. “I never took that chance. I flew.”
Australia is 2.9 million square miles in area with 500,000 square miles of desert.
Capuchins are known for their austere lives.
The only visible reminders of his time in Australia are two postcards situated on the shelf of a nearly empty book case. One postcard shows a kangaroo, the other a koala bear.
“I’ve seen kangaroos in zoos, but otherwise stayed away from them. They can rip you apart with one swipe of their claws. But they are very interesting creatures, a marvelous example of God’s creations. Koala bears too,” he said.
Working with the Australian people was no different than working with people in the United States, except for the accent, Fr. Carmel said.
In a humble summary of his life, Fr. Carmel said “there is nothing exciting in my life that would be newsworthy.”
“I’m happy that I’ve had this vocation and still have it,” Fr. Carmel said. “I think it’s a special privilege to be called for this special way of life which brought me closer to God and gave me the opportunity to help all those people for all those years. Ninety-nine percent of all the incidents in my life have been happy or joyful. I’ve received inspiration by teaching others.”