“No re-shoots or anything like that,” she said, smiling and chuckling while sitting in her office at Silver Lake College, where she has taught for 41 years and serves as director of graduate music studies and Kodály music education programs. 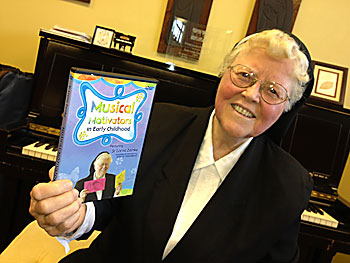 Sr. Lorna Zemke, director of graduate music studies and Kodály music education programs at Silver Lake College in Manitowoc, holds a copy of the educational DVD, “Musical Motivators in Early Childhood.” The Franciscan Sister of Christian Charity began the Music for Tots program in 1984. (Benjamin Wideman | For The Compass)

Kodály is an approach to music education developed in Hungary in the mid-20th century.

“The video crew turned on the cameras and let them run until we were finished, and then that was it — we were all done. I talked for two-and-one-half hours straight. One take,” said the Franciscan Sister of Christian Charity.

The video spotlights a seminar Sr. Lorna held for music educators last May at Silver Lake College, where she demonstrated toys, props and some of her 75 concepts that can be used with young children. There are also video snippets spliced in that Sr. Lorna provided of her interacting with youngsters at other programs.

“I’m hoping the DVD will help music teachers know better what to do with young kids,” she said. “I hope it gets their creative juices flowing. Not that they have to follow everything on the DVD, but they might say, ‘Oh, that gives me an idea!’ I’m hoping it sparks that creativity.”

Among her former students is John Feierabend, director of the music education division at The Hartt School at the University of Hartford (Conn.). He’s seen interviewing her on a portion of the DVD.

“You’re creative, you’re passionate, your spirit is contagious,” he tells her. “You’re just a wonderful role model for what every music educator should be.”

Sr. Lorna was born and raised in Oshkosh, where she attended Sacred Heart Parish. She developed an interest in music at age 4, when her parents provided her with piano lessons. To this day, she prefers playing piano and organ, although she’s also skilled on the trombone and clarinet.

In 1984, Sr. Lorna began the Music for Tots program at Silver Lake College. The program, geared to children ages birth up to first grade, still draws about 250 participants each year. In 1986, she began a program at Silver Lake for pregnant couples called Lovenotes, which shows them how to communicate with their unborn child through music. That program also is still going.

She has taught from coast to coast, and overseas as well, while learning and teaching music. In addition to Silver Lake College, she has taught in Two Rivers; Chicago; Yuma, Ariz.; and Santa Barbara, Calif.

About five years ago, her presentation at the Texas Music Educators Conference in San Antonio caught the eye of an executive at GIA Publications. “He encouraged me to get it all down on video for other people to see,” Sr. Lorna said.

“But I wasn’t interested at that time. Then, last year again he said, ‘Sister, come on, we’d really love to get these things down on video.’ So the DVD is a result of that.

“Now, I guess I just hope people enjoy it and come away with some good ideas for teaching kids about music,” added Sr. Lorna.