His father gave him a used clarinet at age 10 and that changed his life forever. 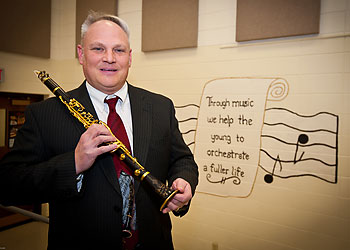 Formal lessons didn’t come at first. Instead his dad would put on records by famed New Orleans jazz clarinetist Pete Fountain to practice with. His aim was to mimic his style, and at a young age he was already playing Fountain’s famed “A Closer Walk With Thee.”

Van Ess’s lifelong passion for music and New Orleans jazz continues through his well-known jazz and Big Band group, “Talk of the Town.” They play concert events, church picnics, concerts in the park as well as private parties.

But for many the most moving of Van Ess’ performances is the New Orleans-style music he and sometimes the Talk of the Town play at funerals. When a musical celebration of a life is called for, for some “A Closer Walk With Thee,” “Amazing Grace” and “When the Saints Go Marching In” provide the very best way to go out. Van Ess said he’s probably played in most every church in Green Bay. Sometimes, he said, “They had it in the will.”

One of his most memorable evenings of music was the night prior to the funeral of retired Green Bay Bishop Aloysius Wycislo. That evening he played at St. Francis Xavier Cathedral for the late bishop, who was a friend and supporter of his work with children, said Van Ess.

A personal dream-come-true happened a few years ago when Van Ess set out to meet his “childhood hero” Pete Fountain. At the time Fountain had a club inside one of the New Orleans hotels, and Van Ess made numerous phone calls trying to learn just when he would be performing.

The day arrived when Van Ess and his wife Denise (their sons are Nick, 22, and Alex, 18) and other family members arrived in New Orleans. He tracked down Fountain’s assistant who recognized his voice instantly, “‘You’re Kevin Van Ess from Green Bay,'” he remembers her saying. It was about 6 p.m. with the show scheduled to start at 8 p.m. He asked if he could meet Fountain, and she replied that he visits with fans after his show.

But a little more convincing on his part worked, and as she went to get Fountain, Van Ess pulled out his clarinet and started to play. Soon he realized that Fountain was standing behind him in that hallway listening to his music.

That evening Fountain put Van Ess’ group at the front tables, and after the show the entire group headed to his dressing room where the pair played together — and Van Ess proudly notes he has video of that memorable first evening of music. “We’ve been friends ever after,” he said. Van Ess has returned to New Orleans to perform in the big Mardi Gras parade with Fountain, who is always the first float of the day.

Today Van Ess’ most prized possession is one of Fountain’s clarinets. Bishop Wycislo blessed his clarinet, he said with a smile.

Of the 900 students attending Washington Middle School, half are in the band program. Nearly 300 of these students are able to participate because of a program he developed inviting area residents who no longer use their instruments to donate them to the Washington Middle School band program. The popular Allouez Village Band, which performs the third Monday of each month September to May at the Meyer Theatre in Green Bay, has also taken on the donation project. Often the very next day after he receives an instrument from the Allouez Village Band it’s in the hands of a student, he said.

Music makes a huge difference in the lives of young people, said Van Ess, with many outperforming non-music students in test scores. “I think music is important because it develops the whole brain,” he said. He got to proudly show off his students when the Wisconsin Education Association Council (WEAC) decided to feature him and his music program in a commercial which has aired across the State of Wisconsin.

Van Ess takes his clarinet with him everywhere, and that included to New York City and the site of the World Trade Center towers. It was 2002 and clean-up was ongoing. He walked up to the 9-11 site and played “Amazing Grace.”

“You could hear a pin drop,” he said. Then they walked over to visit with the fire station closest to the towers as well.

He remembers well the note that Bishop Wycislo sent him following an honors band event that Van Ess had invited him to at the Weidner Center. It “was something to the effect ‘how much I enjoyed it,'” remembered Van Ess. “‘What a neat thing we were doing for students through the power of music and what a great thing we were doing for the community.'”

Anyone interested in donating musical instruments to the Washington Middle School’s music program can call (920) 448-2095.