A new group, started in Green Bay in January of 2012, is willing to help. Hands and Hearts with Haiti hosted Msgr. Bien-Aime Sept. 27 to Oct. 11. The nature of the visit was to build relationships and discuss the needs the volunteer group can serve in Mirebalais. Msgr. Bien-Aime spoke at St. Matthew Church, Allouez, and Assumption BVM, Pulaski. He was also invited to a luncheon at St. John the Baptist in Howard. 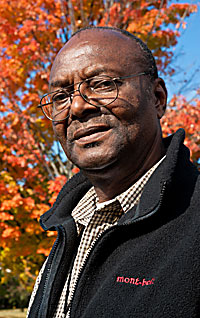 Hands and Hearts with Haiti had been affiliated with a group in Cleveland, and in partnership with the Parish Twinning Program of the Americas, based in Nashville. They connected with Msgr. Bien-Aime through members of the Ohio group who had supported his previous parish, St. Anne in Maissade.

An additional challenge for the parish in Mirebalais, located less than an hour’s drive northeast of Port-au-Prince, the capital and largest city in Haiti, is sustaining the faith, said Msgr. Bien-Aime.

Msgr. Bien-Aime, who also serves as vicar general for the Diocese of Hinche, has made strides in education. He founded a high school in Mirebalais, which currently has 25 students. He looked forward to visiting the school upon his return to Haiti. The first day of classes were held while he was in Green Bay.

Five members of Hands and Hearts with Haiti visited Mirebalais in January. Msgr. Bien-Aime took the group to see some of the rural communities served by the parish.

“One of them that he would like us to focus on is the Village of Noyau,” said Kay Schumacher of St. Matthew Parish, who made the trip. “We are in the getting-acquainted stage and learning from people what it is that would help them to be self-sustaining. Our goal would be to be in partnership with them so they can be a self-sustaining community.”

“We are going to work with Father and his people to build a chapel in Noyau,” said Mark Schumacher, who did not make the January trip, but has been to Haiti on four previous occasions. “The current chapel is in bad shape. They can’t keep the animals out.”

Chapels such as Our Lady of Deliverance in Noyau give people in rural areas a place to worship. The faithful gather for liturgy of the word on Sundays. Msgr. Bien-Aime said that he visits the chapels served by the parish at least one a month. He identified other struggles facing the people.

“We have so many problems,” he said. “We need help in education, religious formation, social activities, agriculture, the breeding of goats and getting clean water.”

“There are parishes, one in Detroit and one in Montana, that help with particular projects,” said Mark. “We view ourselves as fitting in that pattern. We might take more than one project at a time. It all depends on our communication with the local people.”

Kay added that a group will likely visit Mirebalais in January of 2013.

“We would like to keep a core of people going so we can visit with the same people and establish those relationships,” she said.

“We should be invited, we should not impose ourselves,” said Mark. “We shouldn’t be telling them what they need; they should be telling us.”

Despite the many hardships, the people of Mirebalais remain positive and hopeful, said Msgr. Bien-Aime.

“That amazes many visitors,” he said. “The news about Haiti is the earthquake and bad political events. Journalists are always surprised to see smiling people. I remember one journalist who said, ‘I will be converted, I believe in God now because I see the people celebrating their faith despite the poverty.’ Our churches are crowded on Sunday for Masses. Usually, our celebrations are very joyful with drums and songs.”

Kay saw the positive spirit of the people during a 2010 trip to Haiti. She stayed at a hospitality house in Port-au-Prince the evening prior to returning home. A heavy storm struck the area, including a nearby tent city that housed nearly 2,000 people.

“Every time I thought it couldn’t rain any harder, it did,” she said. “We had flaps on the side of our tents so we put all of our stuff under our beds. We had beds. I was thinking about all those people in the tent cities. Everything they owned was in those tents and it was mud underneath them. We knew there was a 15-year-old boy in one of those tents who was dying of cancer. We finally got to sleep. The next morning, I was awakened by the sound of the people in that tent city singing ‘alleluia, alleluia, alleluia,’ and they were clapping to the rhythm.”

Msgr. Bien-Aime, who has served as a priest for 33 years, said that the perseverance of the people will carry them through.

“There is no suicide in the country,” he said. “The people have hope. We go to bed at night with the hope that tomorrow will be better. We believe this in our hearts and minds.”