Aggie, a native of Portage, said volunteering “made me closer to the church.” 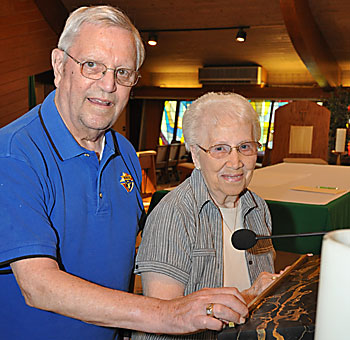 Chuck and Aggie Heck (Dick Meyer | For The Compass)

The Hecks have been members of St. Joseph Parish for more than 40 years, and they have kept up their devotion to service. Aggie taught the second-grade religious education class and has been the coordinator of funeral dinner groups since 1988, an active member of the parish Council of Catholic Women, a lector and extraordinary minister of holy Communion.

Chuck sets up and serves for funerals and daily Masses, is a dishwasher for funeral dinners, and is also an extraordinary minister of holy Communion. Each evening for 15 years, they checked and locked the doors of the church, parish hall and office.

“I had the keys to the church,” Aggie said. “If we were going to be out of town, we saw to it that someone would take our place, see that the lights were out and the doors were locked.”

Their reasons for all this activity are simple.

“To feel part of our church,” Aggie said. “I think it helps the parish out. It makes us closer to God to be part of him. To be working in his church, we’re helping to do his work.”

And Chuck said he does it to “bless the Lord.”

Aggie said the Council of Catholic Women holds several fund-raising events each year to help purchase items for the parish. She is in charge of a dinner event held each October. Members of the group make crafts from April through October, decorate dinner tables and sell tickets to each table.

“The proceeds we give back to church,” Aggie said. The money they’ve raised has gone to needs such as purchasing a $10,000 organ, donating $4,000 toward a tabernacle, donating $1,000 toward a new tractor, purchasing Easter candles and awarding two $500 scholarships each year to graduating seniors.

“We feel we are doing a great deal for our church,” Aggie said. “It makes you feel you are part of the church and are doing nice things. Anything our church feels that they need, we try to help purchase it to keep the budget balanced. We try to get everybody in the parish involved.”

“The boys would go up on the ladder and put decorations on the walls,” Aggie said. “And they were all altar boys until they graduated from high school.”

James still lives in Wautoma and is a member of St. Joseph. He now is owner of The Silvercryst.

The couple said volunteering has helped their children.

“With us being involved in the church, our children followed along,” Aggie said. “We never had from them, ‘I’m not going to church.’ If mom and dad are going and are involved with the church, it sets such a good example for your family.”

Chuck retired as a meat cutter in 1995. With both of the Hecks now 82 and having some health issues, they are starting to pull back a little from their activities. They are hoping to find others to take their places who will find as much joy in service to the church as they have had.

“I feel we’re helping our parish out with things that they need,” Aggie said. “It’s made us more aware of being helpful to others. It just gives us a good feeling. If there was something to be done, we said, ‘I can do that. I’ll help with that.'”

“Just do it,” Chuck added. “We’re helping the good Lord. He wants it done. Say your prayers.”