St. John Homeless Shelter gears up for another winter

United Methodist will continue to serve as a resource if guests exceed capacity, but Wood anticipates that the extra space will be sufficient based on past numbers. The number of guests served at the shelter has increased over the past two years, but has been well below 84 per day. Even a harsher winter is not expected to cause a significant increase. 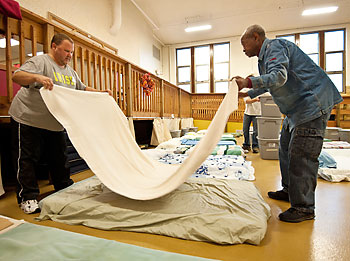 “Cold is cold,” said Wood. “Even though it was a mild winter last year, people needed to be indoors.”

Additional updates at the shelter include a newly created women’s sleeping area featuring a television and a computer to assist with job searches.

“If (women) want to be out on the main floor, they can,” said Wood. “If they want their privacy, they have that ability.”

A maintenance closet was converted into a women’s locker room; an additional sink, toilet and shower were installed in the men’s restroom; the laundry room was restructured to provide for increased service; and an industrial refrigerator will replace two smaller units in the kitchen. The improvements coincide with a new three-year conditional use permit approved by the city.

This season marks the sixth as St. John. The shelter originally opened in 2005 under the COTS program. Awareness of what the shelter offers has grown over time, said Wood, who previous worked for Forward Service Corporation in Green Bay and Joy House, Safe Harbor and Cox Center for Addictions in Milwaukee.

“It’s so much a home to so many of our guests who are chronically homeless and with us year after year,” she said. “They will often talk about the respect and compassion they receive from staff here. Not only is the shelter known, but it’s known as a place that you can come in and receive that dignity. Maybe it eliminates that barrier of having to enter a shelter if you have somebody saying, ‘Here is a place you’re going to be loved and cared for.'”

Wood has connected with several guests who visit the shelter on Tuesdays. Many sleep outdoors during the months when the shelter is closed. They can come in on Tuesdays to get their mail, have their clothes washed, get personal supplies, talk to a case manager and pick up snacks and food items.

“It’s a continuation of the services we’ve been able to offer,” said Wood. “We very consistently see 19 people per week who utilize that service. I’ve heard a lot of their stories and have built those relationships. I’m ready to open our doors and to have a place for them to call home. I’m excited for our new staff to meet the guests.”

Providing meals and a safe place to stay are at the forefront, but the shelter’s mission is much deeper, added Wood.

“It’s about instilling hope, to get someone to open up and really hear what they have to say as a person,” she said. “Sometimes you have to meet those physical needs first. You can’t talk about God’s love and their value as a person when they are hungry and don’t have a roof over their head. If you can provide for those basic needs, and you can let them know they are safe, then whatever conversations you want to have with them, they are going to be open.”

“They will be out walking all day and can go that entire day without anyone making eye contact with them,” explained Wood. “They can come here and we know their names, we call them by name. We look them in the eye and they know that they are cared about as a person. That is what will motivate some of them to take those steps for change.”

The shelter serves people of various backgrounds, including those with addictions and a history of mental illness. Last year, the oldest guest was 75 years old, a double amputee who had been sober for 20 years. The youngest turned 18 in the middle of the season and had aged out of foster care. He attended high school during the day.

“He is still a kid himself and was thrown into this adult world,” said Wood. “For his parent-teacher conference, our case manager went in support of him. He’s a great kid.”

Thirteen percent of last year’s guests were employed, but did not make enough money to support themselves, and 65 percent were actively seeking employment.

“We see everything that can break any stereotype,” said Wood. “We had another young gentleman whose parents got evicted. It’s not always the fault of the homeless person.”