“It started in 1995,” Burns explained. “I was a nurse so I couldn’t get away for holidays. My husband and I started a Christmas dinner at St. Pius X, where we were members.” 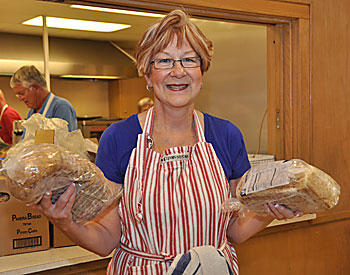 Realizing that “people are hungry all the time, not just on holidays,” her next step was to organize meals for residents of the Emergency Shelter in Appleton on a regular basis. Fellow parishioners stepped up to help and they began making a meal the first Sunday of every month.

That grew to meals on more days, but eventually their efforts outgrew the space available at the shelter. “We did a survey to see what was needed in town,” she said. An evening meal was the result.

The fledgling group started at St. Joseph Church in downtown Appleton. In June, 1999, they began serving a meal every Monday. “We served about 35 people,” Burns said. They started with one chef, made the meals at the Emergency Shelter and brought them over to St. Joseph.

In November, they moved to St. Joseph Middle School, where they could use the kitchen. The new group took the name Loaves and Fishes, which was similar to a group in Fond du Lac. “And Dorothy Day had one by that name, too,” Burns said with a smile.

When St. Joseph School moved out of downtown in 2000, Loaves and Fishes moved to Trinity Lutheran Church. “We felt a downtown location was necessary. It’s centrally located,” she said.

“We continued serving one evening a week until 2010. It was always my desire to serve every day,” she said. The number of cooks and volunteers grew until they were able to serve on Mondays and Wednesdays.

“We serve people who are unemployed, homeless, from traditional families, from single-parent families, senior citizens, physically disabled or anyone else who wants to join us for a meal. About 80 percent are young adults who come to socialize.”

She said, “People are grateful for what we do. We have a box where people can jot down what the program means. One woman said, ‘By coming here, I don’t have hunger pangs when I go to bed.’

“Another said, ‘It helps expand my food stamps.'”

“We touch people in many different ways,” added Burns. “People will stop by and ask us to pray for someone in their families, or for some other need. I stress Catholic social teachings — you know, the rights and dignity of all people.”

Burns has a master’s degree in theological studies from St. Norbert College. “I don’t give people a lot of do’s and don’ts. It’s about treating them like they were eating at my house. It’s a time when we can give them dignity and respect. I always tell volunteers, it’s not about being better than them.”

Loaves and Fishes currently operates with more than 300 volunteers. There is no paid staff, but Burns is looking into grants to see if she could get money to hire someone part-time to help. Volunteers cook, set up, clean up and serve as greeters. Some make desserts at home and drop them off at the church.

These days they serve about 100 people each evening and are looking to add a third evening meal during the week.

Burns and her husband, Mike, moved to Appleton in 1980 when Mike took a job at Kaukauna Club Cheese. She worked as a nurse for 29 years, then as a director of religious education for six years. The couple has three children, Michael, Jennifer and Brian, and four grandchildren.

She also is an associate with A New Genesis. “I wanted to be part of something bigger than myself,” she said.