Workshop addresses ‘Ministry on the Fringe’

“Our images are all stereotypes,” said Deacon Meyer of St. Elizabeth Ann Seton Parish in Green Bay. “It’s an inner experience (people living on the margins) are having. Most times it’s an embarrassment for them. Most times they will disguise it. … We need to crash through those images. You cannot look into someone’s eyes and see their heart if you have these images.” 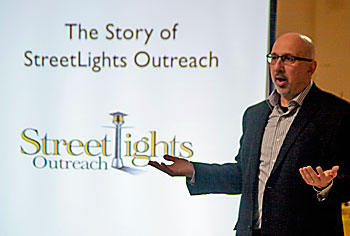 Deacon Steve Meyer of St. Elizabeth Ann Seton Parish in Green Bay speaks about StreetLights Outreach during a “Ministry on the Fringe” workshop at St. Matthew Church in Allouez Oct. 6. (Rick Evans | For The Compass)

The workshop, held at St. Matthew Parish, marked the first of its kind offered by Deacon Meyer and Pichler. They emphasized that they are not social workers or counselors, but ministers who have learned through much trial and error. In 2004, the duo started StreetLights Outreach in Green Bay. Pichler, director of lay ministry formation for the diocese, also serves as an on-site coordinator for Young Neighbors in Action and on the board of trustees at St. John the Evangelist Homeless Shelter in Green Bay. Deacon Meyer is also the president of the Ecumenical Partnership for Housing.

StreetLights was formed in response to Deacon Meyer’s desire for community outreach experience during formation for the diaconate. The grassroots ministry began with the two men providing a presence on a Friday night on the corner of Walnut and Broadway in the heart of downtown Green Bay. They brought a sign and a willingness to talk with people who were interested in conversing. Getting to know a person is the first step, said Deacon Meyer.

“We are people of stories,” he said. “We cannot know someone unless we know their story.”

He shared the story of Rooster, a Vietnam War veteran whose personal problems had led to alcohol abuse.

“If I had lived Rooster’s story, there is no doubt that I would have self-medicated,” said Deacon Meyer. “When we know someone’s story, we can no longer judge.”

StreetLights expanded its ministry with the offering of block parties in at-risk neighborhoods in the city. Food is provided and residents are invited to share in fellowship with one another.

“These things have become community events,” said Deacon Meyer. “They are a vehicle for love.”

Pichler explained that both he and Deacon Meyer were formed in Benedictine hospitality. He offered tips for those who serve people on the margins:

• Accept people where they are; never judge.

• We don’t need to fix people, just love them.

• Listen to their stories; place yourself in their shoes.

• Understand that people live what they know.

“We have this preconceived notion of where people should be in their lives,” said Pichler, addressing the first tip. “Our role is to love them.”

“People need to heal from the inside out,” said Deacon Meyer. “When we try to fix someone, they may not be ready to take that step. I believe in the power of the Spirit.”

He acknowledged that serving the needs of people, such as providing housing, can be an act of love, but it shouldn’t be done with the notion, “You’re broken. I can fix you.”

The facilitators engaged in role playing to demonstrate situations they have encountered through StreetLights Outreach. The first scene focused on the need to let the person on the margin know it’s safe to speak with you and to close the natural distance between the parties.

Foundational underpinnings of ministry to people on the fringe, offered at the workshop included: learn to enter into discussions without agendas, truly believe that each person has something to offer and simply treat people the way you want to be treated.

The program also included a video feature on the Gubbio Project, a ministry that serves the homeless in San Francisco. Pichler experienced the ministry firsthand while visiting the Bay Area as a part of a Young Neighbors in Action service trip. Through the project, St. Boniface Church in the city opens its doors from 6 a.m. to noon to allow the homeless to sleep in the pews.

“The church is in the Tenderloin district of the city,” explained Pichler. “These people walk all night. If they found a doorway or park bench and tried to sleep on the street, they would get beat up or lose their stuff. Think about how tired you would be from walking all night long.”

Deacon Meyer told a story from the Diocese of Green Bay where the homeless were not welcomed. A few people wandered into a church during Mass to escape a rainstorm, but were asked to leave by the ushers.

“We have so much work to do,” he said. “Christ needs us to move our compassionate hearts, to open our eyes to the hearts of others.”

Workshop attendees also took part in a role-playing exercise to get a feel for what it’s like to minister on the streets. Pichler said that, if someone has an innate talent for the ministry, skills and knowledge can be developed. Some find that the ministry is not for them.

Other tips included looking out for con artists, knowing your limitations, safety first and never minister in the streets alone.

Tom Truckey of St. Patrick Parish, Stiles, said that he found the workshop affirming. He has been involved in various forms of outreach to those on the fringe, including ministering to the homeless, those on the streets and the incarcerated.

“I understand a lot of the things they were saying, like the need for boundaries,” he said. “I don’t see anyone as being any different. I don’t look at a homeless person as a different clientele. I don’t see people that way.”