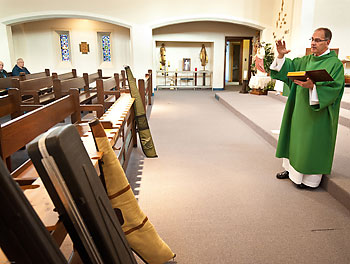 Deacon Paul Zenefski, parish director at St. Hubert Parish in Rosiere, blesses rifles brought by hunters during a hunter’s Mass Nov. 3. The blessing of weapons and hunters has been held at St. Hubert Church for about 35 years. (Sam Lucero | The Compass)

He asked that God keep the hunters safe, that they be given patience and that they have a steady and accurate aim.

“Help them enjoy and appreciate the gift of your creation — both in the game you provide and in the beauty of nature,” Deacon Zenefski added.

“St. Hubert is the patron saint of hunters, so we thought, what better way to start the hunting season?” said Halada. “They bring in their guns and bows and we pray for a good hunt and that everyone is safe and that it’s done (as part of) God’s plan.”

In its heyday, dozens of hunters attended the Mass and brought their guns for a blessing, they said.

“At one time we used to have rifles and bows along the front of both pews,” said Halada. “There were like over 100 rifles that we would have. They would come 45 minutes ahead and we had two people checking the guns to make sure they were not loaded. This is way before 9/11 so there was not even a thought of anything like (terrorism).”

At this year’s Mass, celebrated by Norberine Fr. Steve VandenBoogard, four rifles each outfitted with a spotting scope were brought in for the blessing.

The blessing of weapons and hunters “was kind of let go because of the change in priests and then, all of a sudden, we didn’t have a priest anymore,” said Massart. Deacon Zenefski has been parish director in Rosiere since August 2010.

“We want to get it back going again,” added Halada. A social gathering was held after the hunter’s Mass. Halada said he wants to invite the Knights of Columbus to host a wild game supper after next year’s Mass. They also plan to extend invitations to more hunters around the diocese. “With the hunting in the area, it’s so big and we want to cater to the hunters and tell them you are part of everything we are doing here.”

The parish also hosts a deer hunter’s Mass during the opening weekend of hunting, Nov. 17, 7:30 p.m.