“I had always had questions about my Catholic faith and a group of us learned things about Scripture during the retreat. We wanted to keep it going,” said Roy Valitchka, one of those eight men who would walk out of the restaurant with a resolve to perpetuate their faith awakening. 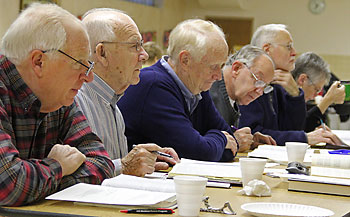 Over the next 35 years the weekly gathering, now called the Fox Valley Catholic Bible Study Group, grew to more than 270 members.

The group, which currently meets at 6:30 a.m. every Friday in the cafeteria at St. Bernadette School in Appleton, has brought God’s kingdom to the Fox Valley in a very visible way through the establishment of more than a dozen outreach ministries carrying an annual economic impact of goods, services and care totaling nearly $11.9 million.

“Through the years all these people stepped up and said, ‘Hey, we can make a difference.’ They took what Fr. Alcuin said to heart, not just with words and pleasantries. They actually did something, providing nearly $12 million in services that government does not supply,” said James Hyde of Appleton, who joined the group four months after its inception.

Schlitz teamed up with Neenah industrialist and study group member Deacon James Asmuth and his connections to business and industry to form St. Joseph Food Program. The program, with an annual economic impact of $3.2 million, now provides food staples for 1,000 Fox Valley families numbering more than 3,000 people every week.

Study group member Deacon Maury Reed, retired director of the diaconate program in the Green Bay Diocese, served on the original board of directors of LEAVEN, a $769,000 ecumenical program providing financial and housing assistance to Fox Valley residents.

Study group members planted the seeds that led to the Fox Valley-wide effort, said Reed, a deacon at St. Bernard Parish in Appleton.

“We were asking ‘What can we do to help the poor?” said Deacon Reed, who also worked in the formation of the COTS and emergency shelter programs for the homeless. “The group was motivated to help out the poor. Their mentality was that helping others through outreach was bringing God to the Fox Valley.” 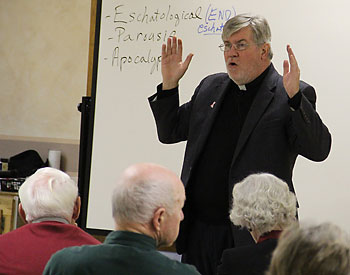 Deacon Reed joined the Bible study group in 1978, three years before being ordained a deacon.

“I’m interested in the changing interpretations of Scripture. The Catholic Church is more interested in Scripture and the development of Scripture than it has been for a long time. It’s very interesting through Scripture study to see how things have developed from the beginning and how much these things are going on today,” Deacon Reed said.

Determining how Scripture relates to a person’s life is up to the individual, said study group instructor Fr. Don Zuleger.

“We don’t do that here,” said Fr. Zuleger. “The flaw in the way Scripture is used in a lot of Bible studies and preaching is that they try to make the word of God fit today rather than really understanding the word of God in the context they came from — the really true word. I want people to walk away from our Bible study with a deeper understanding of the Scriptures we look at. It is up to them to apply that to their life and life context.”

Fr. Zuleger, who has spent 18 of his 36 years as an ordained priest teaching at the high school level and in the early stages of the diocese commissioned ministry program, took over instructing duties 13 years ago after the death of Fr. Orville Janssen, who taught the group for 17 years. Fr. Janssen had succeeded Fr. Alcuin.

“Fr. Alcuin’s motto of this group, ‘Bringing God’s kingdom to the Fox Valley,’ has always been and continues to be the driving spirit of this group,” Fr. Zuleger said. “During the 17 years they had Fr. Janssen as an instructor he was very sensitive to social issues and created all kinds of connections in the community.”

Fr. Zuleger brought to the program knowledge of Scripture gained through graduate studies in the Holy Land.

“It’s through Scripture that we understand Jesus Christ, but not only about Jesus Christ. We also learn our world is part of God’s plan and we learn our place in God’s plan. This gives context to our life on earth,” Fr. Zuleger said.

Initially, group membership was exclusively men, but now includes many woman and several husband and wife teams. Erin Lamers is a convert to Catholicism and mother of three young children. She joined the group five years ago.

“I wanted to know more about Christ and Fr. Zuleger is a genius about the information he knows,” Lamers said. “This group is a huge blessing in my life. You can really understand the meaning behind the stories in the Bible in addition to going to weekly church services. We need to demonstrate that we, as Catholics, are actually out there helping people.”

“These churches are telling people things they never really knew about their faith. People don’t leave their church if they know what their faith is about,” Hyde said. “Too many people go to church at 11 a.m. and leave at 11:45 a.m. There is more to being a Christian. People in our Bible study group do not just wear their religion on their sleeve. They don’t just come to meetings to hear Scripture. They come to be fulfilled. It’s a week-long thing.”

“I’ve talked to people in Madison and Milwaukee and they have nothing like this,” he said. “The biggest promoter of our group is the members themselves through word of mouth.”

For Roy Valitchka, the group provided “the perfect opportunity to find out who I am in this concept called my Catholic faith.”

Valitchka, who spent his career as a journalist, including as an associate editor at The Post-Crescent and news director at a Green Bay television station, said curiosity keeps him coming to study group meetings.

“I didn’t become a journalist because I wasn’t curious. I always want to know the next thing we are going to learn. I look forward to every Friday and getting my questions answered. If you don’t know the answers to your questions you’re not going to get far on the faith journey we’re on.”

Valitchka said study group members have become “emissaries or missionaries for the faith.”

“These people were inspired to do things out of what they’ve learned. It’s had a major impact on our community,” he said.