Kanzenbach explained that he hoped the exhibit gives people a better understanding of the Catholic faith through learning about the church-approved miracles. The complete exhibition features 126 miracles and is comprised of 140 posters or panels. Among the miracles featured on posters at Ss. Peter and Paul included St. Clare of Assisi, Corpus Christi, the Angel of Peace and St. Faustina Kowalska. 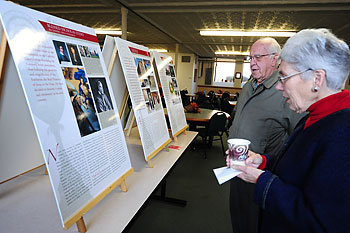 John Walschinski and Barbara Moore, members of Ss. Peter and Paul Parish in Green Bay, view a display of posters in the church social hall Nov. 13 that are part of an exhibit on eucharistic miracles. The display of posters or panels will next be on exhibit at The Greatest Gift in Manitowoc Nov. 19-24. (Sam Lucero | The Compass)

The posters are made available through the Real Presence Eucharistic Education and Adoration Association based in Lombard, Ill. Each includes a combination of text, photos and artwork. Ss. Peter and Paul purchased 24 of the 26 on display. The remaining two were from The Greatest Gift in Manitowoc, which will host the exhibit Nov. 19-24. Therese Gretzinger-Heraly of The Greatest Gift said that she will be adding two more posters to the display, increasing the total to 28.

The goal is to share the exhibit with other parishes or interested groups in exchange for a freewill offering, said Josie Kanzenbach, Bob’s wife, also a member of the Evangelization Committee. Donations will be used to expand the collection of posters.

“This is really something we need to be doing,” said Bob, who built display stands and carrying cases for the posters. “Part of our idea was that this could be utilized throughout the diocese as part of religious ed programs.”

As the number of posters grows, he envisions a second display of a similar size.

“If you had 100 set up, I think it would be way too much for people to comprehend,” he said. “You can only have so many before you reach the saturation point.”

Committee member Dave Demro assisted with garnering funds for the project. Most of the sponsorship donations were obtained through one-on-one contacts, he said. Demro had a personal interest in bringing the exhibit to Ss. Peter and Paul.

“I had been reading about these,” he said. “There are many books with all of the eucharistic miracles, excellent publications. I’m hoping that we can eventually have another showing like this.”

The exhibit is another way to spread the good news, said Renee Guinan, who, along with her husband, Jerry, assisted with the project.

“It’s a way to get the word out,” she said. “You hear that there are many Catholics that have trouble believing in the true presence and this is just a way to realize that it is in fact very real, and it is the body and blood of our Lord and our Lord continues to speak to us in all these miracles.”

Guinan added that she was thankful that some of the miracles in the exhibit are from the past century, including the poster displaying the story of Alexandrina Maria da Costa, who lived the final 13 years and seven months of her life on the Eucharist with no other nourishment.

“We have a pregnancy center here in Green Bay, the Alexandrina Center, and it’s based on the history of Alexandrina and her life,” said Guinan. “She was born in 1904. She lived and breathed and walked this earth. God spoke through these people.”