“Tonight is a night of prayer and we are just praying for the youth that have addictions or other problems,” Contreras told The Compass at the vigil’s opening in the parish social hall, where the Hispanic young adults began their evening with ice-breaking activities. “I think this is a thing that will help the youth to grow, but also (reach out to) the youth who are outside and having problems.” 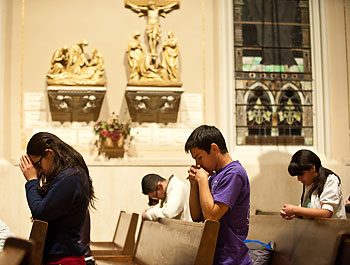 Members of St. Willebrord Parish’s Hispanic youth group, Cristo Vivo, kneel in prayer before the Blessed Sacrament during an overnight prayer vigil Nov. 24. About 60 youth and young adults attended the vigil, which began at 9 p.m. and concluded at 7 a.m. Nov. 25. (Sam Lucero | The Compass)

Contreras explained that she was inspired to organize an overnight event of prayer for two reasons.

“This (liturgical feast) is a special day. One day somebody told me if you want to make a difference in this world, you have to do something that nobody else is doing. So I decided to create an activity that will help” the youth, she said. “Also, this year is the Year of Faith, so we are going to focus on that, making the faith of this group stronger.”

The event included reflections on several topics. The first one focused on Pope Benedict XVI’s apostolic letter, “Porta Fidei,” which declared the Year of Faith. “The next one will be on what are the challenges in our lives that make us forget about faith,” said Contreras. Other reflections focused on faith, love and hope as well as Catholic beliefs.

In addition to the reflections, the youth group participated in Benediction of the Blessed Sacrament, the sacrament of reconciliation and early morning Mass.

Fr. Cribben joined the youth, leading Benediction and joining in adoration. He returned for reconciliation and then celebrated Mass.

“I’m proud and pleased with what they were able to organize,” said Fr. Cribben. “In addition to the youth, there were members of our charismatic group maintaining vigil with the Eucharist” while the youth group took part in reflections in the parish hall.

Contreras, who is enrolled in the diocese’s Emmaus Lay Ministry Formation program, said the idea of an overnight vigil appealed to the parish youth group because “it is something different and they love to do different things.”