Msgr. Klauck, 84, died of cancer on Nov. 4. The Kiel native, a graduate of Ss. Peter and Paul School and Kiel High School, attended Marquette University in Milwaukee for three years as a pre-med student before entering St. Paul Seminary in Minnesota. 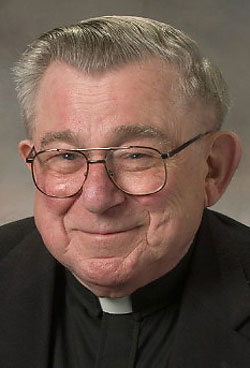 “As I grew up, the thought of becoming a priest was always in the back of my mind,” said Msgr. Klauck in a 2005 interview with The Compass in celebration of his 50th jubilee. “I have never regretted that choice on my part. The priesthood was definitely my path in life.”

He was ordained to the priesthood by Bishop Stanislaus Bona on June 4, 1955, at St. Francis Xavier Cathedral in Green Bay. His first appointment was as an assistant at St. Luke Parish in Two Rivers. Two years later, Msgr. Klauck was appointed to the staff of the Appleton office of the Diocesan Apostolate (predecessor to Catholic Charities). He became diocesan director of the Green Bay Apostolate in 1963 and was appointed director of Catholic Charities and chaplain for McCormick Memorial Home in 1973. In August of 1975, he was raised to the dignity of an honorary prelate (monsignor) by Pope Paul VI.

Msgr. Klauck was proud of the work of the Apostolate and Catholic Charities staffs, especially working with families through the adoption process, said Fr. Kabat.

Bishop Robert Morneau, who officiated at the funeral Mass Nov. 9 at St. Francis Xavier Cathedral, described Msgr. Klauck as “the salt of the earth, a great man.” He added that a couple at Resurrection Parish in Allouez, where he serves as pastor, shared that Msgr. Klauck had helped them with an adoption, which changed their lives.

Msgr. Klauck first became a pastor in 1976 when he was appointed to St. Jude Parish, Green Bay, where he served for 11 years. Among the associate pastors at St. Jude during that time was Fr. Kabat, who recalls seeking advice from Msgr. Klauck in preparation for a funeral after speaking to family members of a deceased parishioner. All the relatives spoke unfavorably about the man.

“Pete looked at me and said, ‘Bob, preach the Scriptures.’ It was a lesson of making room at the table for that man,” said Fr. Kabat. “It’s God’s word that counts, not mine.”

Msgr. Klauck also served as pastor at Holy Rosary Parish, New Holstein, and priest moderator at St. Ann Parish, St. Anna. In 1992, he was appointed rector of St. Francis Xavier Cathedral and pastor of St. Francis Xavier Cathedral, where he served until his retirement in 1999. Msgr. Klauck also served on the diocesan Board of Consultors, as a pastor consultor, on the Priest Personnel Board and on the Presbyteral Council.

Fr. Kabat thanked Msgr. Klauck, who was a friend of his parents, for the example he set for his generation of priests.

“I asked him, ‘What do you value most as a priest?’ He told me gathering with other priests,” said Fr. Kabat, “to experience the fellowship with men who were going through the same way of life.”

Fr. Kabat added that he admired that, even when he was diagnosed with cancer, Msgr. Klauck did not make his table smaller.

“He was open to visitors, enjoyed talking about the Packers, the priesthood and other topics,” said Fr. Kabat. “Celebrating his birthday with a Dairy Queen cake at Manor Care East with fellow priests was fine with him.”

Jim Hogan, who worked with Msgr. Klauck at the Diocesan Apostolate, visited him shortly before his death.

“I spent time with him about a week and half ago,” he said. “I’m so glad that I did. We talked for about a half hour. He was good man. He cared about people.”