“Volunteers have been outside this abortion facility located in the Bellin Medical Arts Building around the clock for 40 days, surrounding the building with prayer and love for all human life,” he said. “We call these volunteers prayer warriors.” About 200 people took part in this fall’s campaign. 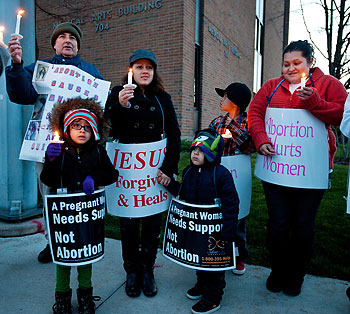 Ball told the group that the Green Bay gathering is one of about 300 campaigns around the world. He said their efforts have led to a change of heart in many women seeking abortions. “In the last 40 days, over 500 lives have been saved in this vigil alone,” he said.

Jody Narvett, a nurse manager and patient advocate at Womankind Medical Clinic in Appleton and Bella Medical Clinic in Oshkosh, spoke about her work counseling women who have had abortions and the physical and psychological ramifications of abortion.

“I consider myself to be on the front lines of this war” against abortion, she said. “I have seen firsthand the devastating results of abortion. The tiniest lives that were lost and the mothers of those babies experienced immediate complications from the abortion procedure requiring emergency medical help.”

She said women who come to her clinics seeking abortions come with no knowledge of the risks. “They are afraid, they are angry, they are feeling trapped, alone and confused. They are looking for a quick way out,” she said. “The limited information she has comes from the Internet, her friends and the media.”

Narvett said her goal as a nurse is to give women factual information that could dissuade them from choosing to terminate their pregnancies.

JoAnn Jones-Holden from Pine River, Wis., who terminated her first pregnancy at age 20, told the group about the trauma she suffered after her abortion, including six months which she called “an alcoholic blur.”

About 12 years ago, she said she joined a church that brought her healing. “God had me in a good place.”

Then her sister’s son, whom she helped raise, committed suicide. “At his funeral I overheard his girlfriend saying that he committed suicide because she had an abortion and had not told him until after it happened,” said Jones-Holden. “So at this point, abortion has directly cost two lives and set me into a tailspin.”

Through a Rachel’s Vineyard retreat, she said “God brought me to a place where I could understand why all of this was so unnerving to me.”

“What God really needed me to do was to bring my son with me to the altar and give him back to God. Without doing that, (God) couldn’t heal me because he didn’t have all of me,” she said. 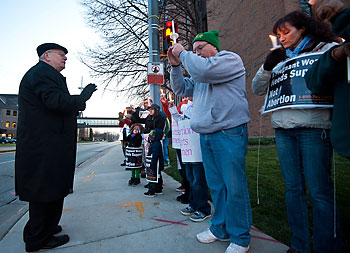 Bishop David Ricken offers a prayer for people gathered outside of an abortion facility at the end of the 40 Days for Life campaign in Green Bay Nov. 4. About 100 people participated in the prayer service and candlelight vigil to close the annual 40 Days for Life vigil to end abortion.(Sam Lucero | The Compass)

Jones-Holden said that there are “millions of other women” like her who don’t know that abortion is at the heart of their problems.

“I thought I was just messed up,” she said. “I sought countless counselors in that 20-year span and no one ever asked me, ‘Did you have an abortion?’ No one ever bothered to mention that that might be part of the problem.”

He said that abortion “needs to be attacked through many different angles.”

“One is through our public witness, through voting for life,” he continued. “We have to preach and teach and talk and speak that the gift of life is a gift from God and nobody has the right to take it.”

He noted that stories like the one Jones-Holden shared show that, while some may see abortion as a “quick way out” of a problem, it is actually “an enslavement for the rest of their lives.”

“It’s something that hurts their soul, their psyche, their body, all of their relationships,” he said, “and we simply cannot let this go on any more. We must make sure that we speak up, we teach clearly and help people to understand this terrible enslavement that abortion is.”

Bishop Ricken and Ball then led the group in a candlelight vigil and walk from Baird Park to the sidewalk in front of the Medical Arts Building. There, Bishop Ricken recited a prayer over the group, which included children and young parents, high school students and elderly couples.