Steenis hunts for ways to help others

But it won’t stop Steenis, a volunteer supervisor at the St. Joseph Food Program in Menasha, from donning his blaze orange hunting clothes, taking to the field and hopefully claiming and donating some venison to help feed the hundreds of people who visit the food pantry each week. 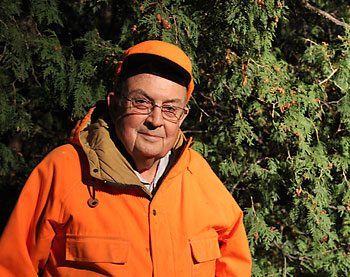 And it won’t stop Steenis from his weekly obligations at St. Bernard Parish. “I serve for Mass every Wednesday. I’ve been serving at Mass since I was 8 years old. That’s nearly 64 years,” Steenis said.

After Mass Nov. 17, Steenis will head to the northwoods with his son, Mark, and grandson, Jacob, along with thousands of other hunters in search of a deer.

Although his injury precludes his direct participation in the hunt, Steenis said the state Department of Natural Resources hunting regulations allow him to accompany another licensed hunter and tag a deer harvested by the other hunter.

“I have a hunting license and I’ll be hunting next to my grandson, who is 12 years old and shot his first deer last year. If Jacob shoots a deer I can use my tag on the deer. And I will certainly donate that deer for the food program,” Steenis said. “They’ll have to field dress it for me and I’ll get it to the meat processor.”

According to Hunt for the Hungry, a northeast Wisconsin program affiliated with a nationwide group, Farmers and Hunters Feeding the Hungry, since the local program began statewide in 2000, 80,000 deer have been donated by hunters yielding 3.1 million pounds of ground venison. The Wisconsin program benefits 700 food pantries in the state, including Paul’s Pantry in Green Bay and St. Joseph Food Program in Menasha.

Monica Clare, executive director of the St. Joseph Food Program, said the program serves about 1,000 families each week. “That equates to about 3,000 people,” she said.

Clare said that means she would need about 1,000 pounds of venison to make sure each family receives one pound of meat. “The people really do like receiving venison.”

Currently the program distributes meats of all kinds twice a month. Like serving at Mass every Wednesday, donating deer is another way Steenis serves others.

“I’ve shot a lot of deer over the years. If I didn’t need the meat I would give it to my friends so it wouldn’t go to waste,” said Steenis, who also hunts deer during the separate bow and arrow season.

“Part of growing up Catholic is learning to give and share,” Steenis said. “Feed the poor. It’s in the Bible. It’s part of the corporal works of mercy.”

The Corporal works of Mercy relate to tending to the bodily needs of others including giving food, drink and clothing, sheltering the homeless, visiting the sick and the imprisoned, and burying the dead.

Steenis said the advent of the Wisconsin deer donation program changed his way of thinking on where to take his unneeded deer meat.

“When they first came out with this donation program I thought it was the greatest idea ever.”

“It’s a good feeling to give the deer meat away to someone who really needs it. My wife and I get enough venison. We eat venison all the time and get our fair share. But we are only two people,” he said.

Steenis said the meat from a donated deer is processed entirely into ground venison.

“The meat processors do not make any special cuts like roasts and they don’t make venison sausage from the donated deer,” he said.

The venison burger is placed in one-pound packages and distributed to food pantries.

Steenis works every Thursday at St. Joseph Food Program helping to distribute food to some of the families using the pantry to meet their nutritional needs.

“I see the venison going out to the people. It’s a wonderful feeling knowing you are helping so many people,” Steenis said. “People are very happy to receive venison, particularly those of some ethnic groups who are knowledgeable and appreciative of the good and nutritious quality of deer meat.”

A list of meat processors participating in deer donation programs and instructions to donate a deer are available online at www.huntforthehungry.com or www.dnr.wi.gov, keyword “Deer Donation.”

Steenis said participating in the deer donation program allows the hunter to enjoy the experience of the hunt while those in need can enjoy the fruits of the hunt.

“If you can’t use the meat, give it to someone who can use it,” Steenis said.