“There is a wall with all the state championship teams,” he explained. “Ever since we came in as freshmen, we have said, ‘We are going to be right there.’”

“It’s been tough because every year since we were freshmen, we lost to FVL (Fox Valley Lutheran),” said senior forward Austin Weigman. “Finally getting past them felt really good. We had the talent all three years, we just weren’t very healthy.”

“(The trainer) changed our warm up, which really helped us,” said Maertz, the Eastern Valley Conference defensive player of the year.

The season got off to a tough start due to a difficult non-conference schedule. Xavier’s record fell to 2-3-1 after finishing 0-2-1 at the Al Gusho Tournament, Aug. 24-25, in Brookfield. 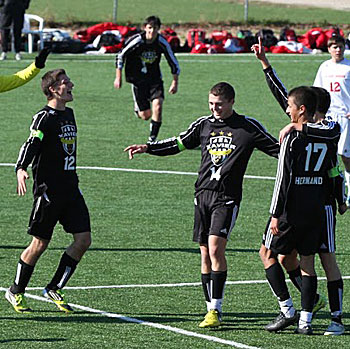 “Our record didn’t show it, but I think we grew as a team,” said senior forward Jacob Hernandez, an all-conference selection. “We played Whitefish Bay, Marquette and Brookfield East, all ranked very high in the state. Just playing those teams gave us a lot of experience that helped us later in the season.”

“That put us over the top with regard to what level we have to play at to play with those good teams,” said Maertz. “We knew we had to stay at that level through the state tournament.”

The state semifinals paired Xavier in a rematch with Notre Dame Academy of Green Bay. The Hawks had defeated the Tritons 2-1 in September. Notre Dame struck first at state and led 1-0 at halftime. Xavier remained confident with the wind at its back in the second half. Weigman, the conference offensive player of the year, tied the state record by scoring four goals as Xavier advanced by a 4-1 margin.

“Going into the game, I definitely didn’t think I would score four goals, but I got a lot of great balls from (Hernandez) through the midfield and then just poked it around the goalie,” said Weigman. “We had a good fan base down there, and they were loud when we were really putting pressure on their defense. After that first goal we caught rhythm and kept it going from there.”

Weigman credits Smith for preparing the team for the turf field at state. The Hawks practiced on turf at Kimberly High School and at an indoor facility.

“That helped us getting the feel of the turf and how the ball is going to move,” said Weigman.

Hernandez assisted three of Weigman’s goals. He added an assist in the championship game to set the state mark.

Xavier was more relaxed for the finale, said Maertz. Throughout the year, the team played loose thanks in part to a pregame tradition implemented by Smith.

“Coach would give us two minutes alone,” he explained. “We would joke around a little bit, have some fun and make sure everyone was relaxed, pumped up and ready.”

Xavier outshot Mount Horeb, the defending state champions, 20-7 in the title game. Cesar Martinez, Stephen Varkoly and Hernandez scored for the Hawks. The victory was the team’s 17th straight to close the season 22-4-1.

Maertz credits assistant coach John Meyer for helping the team keep its level of play consistent no matter the opponent.

The shutout in the championship game demonstrated the prowess of the team’s defense, said Hernandez.

“A lot of what goes into our offense is the confidence we have in our defense,” he said. “At times, we would go with three defenders and put another guy up top to give us more offense. The only time you can do that is if you have confidence in your defense.”

Hernandez, Weigman and Maertz would all like to play soccer in college. The trio first played together on a club teams growing up.

“Going out on top, there’s no better way to end your season than with a win,” said Maertz. “Only one team gets to do it.”

“We had 10 seniors, so winning our last game really meant a lot,” said Weigman, “especially after working so hard the last three years to try to get there.”