This weekend’s collection for retired religious is an opportunity to give back to religious like Sr. Marie. In the United States today, more than 34,000 Catholic sisters, brothers and religious order priests past age 70 benefit from the Retirement Fund for Religious, according to the National Religious Retirement Office. 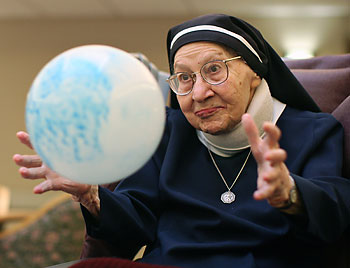 Sr. Marie Hilgers, who lives at Franciscan Courts in Oshkosh, celebrated her 103rd birthday Nov. 7. Here, she keeps active by passing a ball back and forth with an assistant at the facility. (Jeannette Merten | For The Compass)

The fund helps provide vital support for the current and future care of elderly religious. Because of small incomes during their working lives, many religious have insufficient retirement savings, and cost of care continues to rise.

Sr. Marie was born in 1909 at home on the family farm outside Mankato, Minn. Her grandfather started the farm and her great-grandnephew now manages the property, which has grown to more than 1,000 acres. Sr. Marie remembers helping work the family farm, often driving the tractor as they harvested crops such as wheat and corn.
She was the middle of three sisters and she also had three brothers. Sr. Marie was educated through the eighth grade by the School Sisters of Notre Dame. Later, she started working in housekeeping for St. Joseph Hospital in Mankato and became acquainted with the Sisters of the Sorrowful Mother nuns who worked there.

“I liked what they did,” she said. “I felt at home with the sisters and like I belonged to the order.”

At the age of 29, that feeling became a reality, and the order sent Sr. Marie for nursing training, first in Milwaukee and then at Mercy Hospital in Oshkosh.

She later was asked to help set up the pharmacy department at St. Joseph Hospital in Mankato, and she ended up staying there for more than 30 years. While she served in Mankato, several girls entered the community through her efforts and example.

When Sr. Marie retired from the hospital in Mankato, she moved to the Sisters of the Sorrowful Mother Motherhouse in Milwaukee. When the order’s new retirement facility was finished in Oshkosh in 1989, Sr. Marie was among the first sisters to move in.

A talented keyboard musician, she often played the piano and was an organist for liturgies.

Now, her greatest joys are going to chapel and cheering on her beloved Minnesota Vikings. Although the sisters take a vow of poverty and their possessions are few, Sr. Marie proudly displays a Viking bedspread in her room.

When Bishop-emeritus Robert Banks recently celebrated Mass for Sr. Marie’s 70th jubilee, he was moved to ask that Sr. Marie not pray too hard when the Packers have to play the Vikings.

Sr. Marie likes to visit the chapel at Franciscan Courts whenever she has a chance. She enjoys singing and participating in exercise activities.

Franciscan Court caregivers say she has a dry sense of humor. They describe Sr. Marie as dignified and gentle, and one caregiver says she is best exemplified by a quote she has posted outside her door: “It’s nice to be important, but it’s more important to be nice.”