The whole project got its start two years ago when parishioner Monica Hilbert got a new camera. 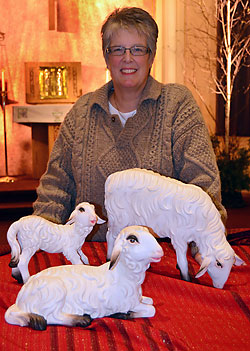 Monica Hilbert is pictured with three sheep that were recently added to the parish’s Nativity set, thanks to funds raised through the sale of Christmas cards Hilbert created. The cards feature photos of images inside St. Joseph Church. (Monica Sawyn | For The Compass)

“This was the summer between teaching jobs when I had time to get to know that camera,” Hilbert said. “I got permission from Fr. Bob (Konkol, pastor of St. Joseph) to photograph anywhere in the church, even up into the steeples. In the process, I fell in love with this church and its history.”

That was part one. Part two was when the parish pastoral council talked about ways to evangelize, and part three started the Christmas they put up the old nativity scene and discovered holes in the roof.

“I try to recognize the nudging of the Holy Spirit in my life,” Hilbert said. “When I saw that creche, I thought, ‘there’s what I can do.'”

With the approval of her pastor and the pastoral council, Hilbert chose eight of the photos she had taken in the church that were appropriate for Christmas. She added quotes from her “favorite iconic women saints” and others to capture the true meaning of Christmas and began taking Christmas card orders.

When the early October deadline arrived, Hilbert had the cards printed. Then came the decision: What to order first. That question answered itself when a woman asked to purchase outright a small lamb in memory of her infant who had died. It made sense, Hilbert said, to add a few more sheep this first year. Someone else bought another sheep, others simply made donations. And, they sold around 1,500 cards, at $1 each, with half the money going to the printer. In the end, Hilbert had about $1,500 for the first order.

“Because of shipping and customs costs, it doesn’t pay to get them one at a time,” Hilbert said. “Plus, the company makes the figures as the orders arrive.” So, when the order deadline is reached, Hilbert will get what she can for the money raised thus far.

Next year, Hilbert hopes to add a shepherd or shepherdess, which will run about $1,600. Eventually, the rest of the stable animals, along with the Magi and an angel, will join the characters in the creche — which is being refurbished by fellow parishioner Jeff Hoffman.

To thank each of the people who ordered cards or made donations, Hilbert made a DVD slide show using the photos she took in the church, including some of things not visible to the casual church-goer: the three bells that are no longer rung in the steeples, for instance, and parts of the facade of the second church on that site (the current building is the third) that is visible behind the towers. Some of the loose bricks she found will be incorporated in some way in the new manger scene. (The slide show can also be seen on the parish website, www.stjosephsb.com.)

A few parishioners have requested that note cards be added to the selection, and Hilbert said those might be attractive to the many tourists who attend Mass at St. Joseph in the summer. The photos will come from Hilbert’s stock of the church’s historical features.

“Some people might say we should have just bought a new Nativity scene,” Hilbert said. “But this creche is part of our history. How many prayers have been said before this one, prayers almost embedded in these walls, so that today we pray in union with our ancestors? How many children have knelt before the crèche? I’m a firm believer in preservation.”

So, the characters in St. Joseph Parish’s Christmas story will arrive on the scene a few at a time as the story unfolds, year after year, card after card.