The quilts, which had been hand pieced and quilted by Kristoff for each of her seven children, 17 grandchildren and 15 great-grandchildren, served as fitting decorations for the birthday luncheon. 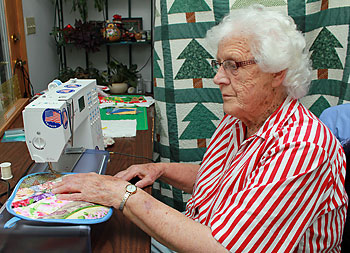 Among the works of art displayed were reminders of special moments in Kristoff’s life, a life devoted to faith, family, kindness and helping others. Quilts for the sacraments of baptism and matrimony were mixed with those given for graduations and birthdays. There was even one with an appliqué of a little boy made of fabric from her late husband Joe’s shirt and blue jeans.

A retired school teacher and principal, Kristoff’s career started in the 1960s out of necessity. With seven young children and a sick husband at home, she knew she had to do something.

Daily, she drove the 100-mile, round-trip route to Marinette Teachers College, where she obtained a two-year degree needed to start her career as an elementary school teacher and principal. Five years later, she obtained her bachelor’s of science in education from Northern Michigan University in Marquette, Mich.

“I’ll never forget the time I was going to have a math test on Monday,” she said. “It wouldn’t stick in my head. I told the kids, ‘Pray for me that I pass the test.'” When she got to school, the teacher had cancelled it until the next day. It was a load off her shoulders, she said, and she passed it with ease the next day.

After 20 years of teaching third grade and serving as building principal in the Dunbar, Wis., school district, Kristoff retired and began her quilting hobby. It was her daughter, Kristine Rauter, who showed her how to quilt when Kristoff took a trip to Florida to visit her. “I watched her quilt and I was hooked.”

Although retired, Kristoff will always be a teacher. She has taught quilting and crochet at the Northwest Technical College branch in Pembine, St. Margaret Church and among friends at her quilting clubs in Norway, Marinette and Menominee. She also directed and taught faith formation for many years at her home parish.

Together, Kristoff and daughter Geralyn Schlais hand pieced many altar banners at St. Margaret to display throughout the liturgical seasons. The wide panels warm the stone walls and help create a prayerful atmosphere.

Giving of her talents to those in need extends beyond her family and church community. Along with her quilting friends, she’s made blankets for various charities.

Small quilts were made for the Marinette Police officers who have a program in which donated blankets are handed out to children frightened by traumas such as car accidents and fires. When Kristoff created a quilt block to help raise funds for the “Show Your Colors America” project for the victims of the Sept. 11, 2001, terrorist attacks it was selected to appear in Country Home Magazine.

In addition to the quilts Kristoff has given her children, she’s also presented each with a statue of the Infant of Prague. In connection with the image, she had heard, “If you honor and respect the Child Jesus, you shall never be in want.”

With blue as her favorite color, Kristoff has been devoted to the Blessed Mother for as long as she can remember. “We had a group of neighbors that would go house-to-house to pray the rosary,” she said.