This year the new beginnings include a historic hymnal, the only one of its kind ever published in the United States, written entirely in the Hmong language. The book is the culmination of nearly 10 years of work by local Hmong Catholics to publish the hymnal, said Mai Chang of Appleton, one of those who spearheaded the effort. 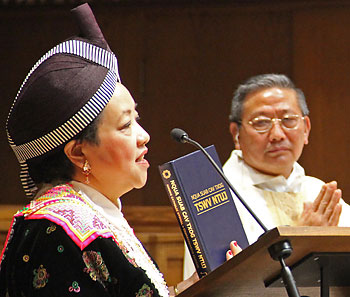 “The Hmong people never had a hymnal before. We just wrote things down on a piece of paper and copied them,” said Chang, holding one of 4,000 books printed in the first edition of the hymnal.

In 2003, Chang and other Hmong women came up with the idea of putting together a book of hymns, some written by Hmong composers, and printing the book in the Hmong language.

“We organized a group and proposed our idea to the Hmong American National Catholic Association. They approved the idea,” Chang said. “We started a liturgy committee and met monthly to decide what songs to include.” Chang said the group received financial assistance from the diocese, through private contributions from the Hmong community and by raising money from various activities such as egg roll sales.

“We received the first copies last week and we love them. For years we actually wrote out copies of the hymn. I hated that. Now we finally have the books and there is no need to make copies,” Chang said.

Bishop David Ricken, who presided over the special Hmong New Year Mass and blessed the hymnals in a ceremony following the Mass, said the books are important for the Hmong people.

“The hymnal is an incredible achievement,” Bishop Ricken said. “It’s the first Hmong hymnal in the entire country and is beautifully done with beautiful hymns and chants. We’re very grateful to the committees from St. Bernard and the diocese that helped put the books together.” 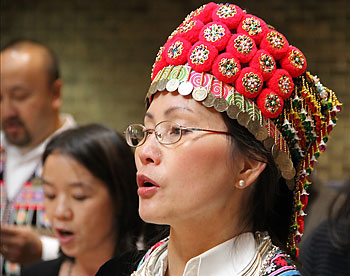 Bao Kong of Green Bay joins the Hmong choir in song during Mass Dec. 8 at St. Bernard Church in Appleton. (Steve Wideman | For The Compass)

During his homily, Bishop Ricken urged the marrying of the Hmong and other cultures “with the Gospel of Jesus and the teachings of the Catholic Church,” noting they can often live in harmony, “but sometimes can’t.”

He said Saturday’s celebration was a very important day for the Hmong community because it marked the beginning of the Hmong New Year and coincided this year with the feast of the Immaculate Conception.

Many of those in attendance wore traditional clothes, including the choir comprised of men and women from Hmong communities in Green Bay, Appleton and Oshkosh, said Deacon Joe Vang of St. Bernard.

He said there are currently 22 Hmong families from Appleton, 35 from Green Bay and one from Manitowoc who are Catholics. These families annually rotate Hmong New Year celebrations and Masses between St. Bernard and St. Jude Parish in Green Bay, Deacon Vang said. Masses, except for the homily, are conducted entirely in the Hmong language.

Deacon Vang said it’s challenging to maintain a Catholic Hmong population within the Hmong culture where the primary religion is animist, a religion based on a belief in souls and spirits of many kinds influencing human life. He said the fact that weekly Masses at St. Bernard and St. Jude are celebrated in Hmong and the publication of the Hmong hymnal books will ease that challenge.