She was born in 1909 at home on the family farm outside Mankato, Minn., and she spent much of her long career running the pharmacy department at St. Joseph Hospital in Mankato. 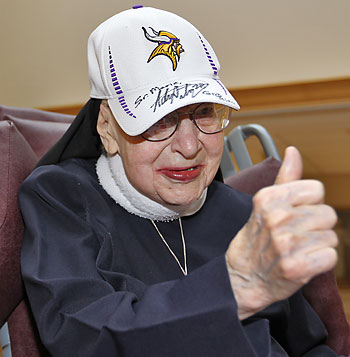 Although the sisters take a vow of poverty and their possessions are few, Sr. Marie proudly displays a Vikings bedspread in her room.

Wanting to do something special for Sr. Marie, Alderson contacted the Vikings.

“I told them about Sr. Marie, and asked if they would be willing to send her a little memento of the team,” she told The Compass. “They came through with flying colors.”

When Alderson presented Sr. Marie with the memorabilia on Dec. 8, she was overwhelmed. “Her smile grew wide, and she declared, ‘The Vikings! Oh, my gosh,'” said Alderson.

It was Christmas come early.

Editor’s note: Sr. Marie Hilgers passed away Dec. 29, one day before the Minnesota Vikings defeated the Green Bay Packers for a spot in the NFL playoffs. A Mass of resurrection was held Jan. 2 at Franciscan Courts Chapel with burial at Riverside Cemetery on Thursday, Jan. 4.