Powers and Cavs coming of age on the court

“I had a bad sophomore year,” he said. “I just wasn’t aggressive. I had many games where I didn’t score much at all.”

Powers averaged double figure points a year ago, but was still too unselfish in the eyes of the coaches. 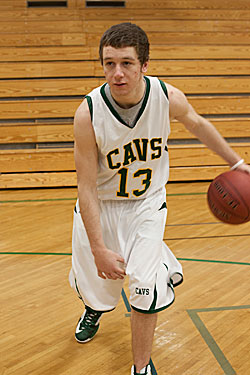 Guard Kiefer Powers is averaging 25 points per game so far this season for the St. Thomas Aquinas Academy boys’ basketball team. The Cavaliers are off to a 5-1 start. (Manu Junemann | For The Compass)

“My uncle (head coach Ric Powers) and my dad (Terry Powers, junior varsity coach) kept telling me to shoot the ball,” he explained. “I understand that now.”

Powers’ role on the team is to put the ball in the basket and the 6’1″ junior guard has excelled so far this season. He is averaging 25 points per game at press time and the Cavaliers are off to a 5-1 start.

“I’m being more aggressive,” he said. “I just need to keep the numbers up and keep playing hard. I’ve had a lot of good defenders on me. I need to stay aggressive and try to get them in foul trouble. If I take the good defender out of the game, it makes it a lot easier for me to score.”

Powers’ high game so far is 30 points in a victory over Florence. He poured in 28 in a win over Stockbridge, including seven three pointers. He is maintaining a shooter’s mentality this season.

“I usually think the next shot is going in, that’s why I just have to keep shooting,” he said. “I usually don’t feel it in warm-ups if I’m going to shoot the ball well. If anything, I’m usually off in warm-ups.”

Powers and junior point guard Jameson Bardowski are the team’s co-captains this season. The roster doesn’t feature any seniors, but St. Thomas Aquinas does have experience. Powers, Bardowski and fellow juniors Casey Boyle and Mike Schmidt played on the varsity as freshman. Experience has brought confidence.

“I remember the nerves I had as a freshman,” he said. “I was a wreck that first game. I had to learn quickly to start on varsity as a freshman and as a sophomore. It was tough. I know it helped me for sure. I now know what to expect. I’m excited about this season and for next year.”

The Cavaliers have won five straight games after dropping the season opener to a veteran Suring team. St. Thomas Aquinas hopes to be among the top teams in the Marinette and Oconto Conference. Powers shares credit with his teammates for the early success.

“Jameson played AAU ball this summer and it helped him a lot,” said Powers. “He came back a really good player.”

Bardowski is averaging 17 points per game. The Cavaliers are not a big team in terms of height, so team rebounding is important. Boyle leads the team on the glass.

“Casey is our main guy,” said Powers. “He loves getting boards. He hits the boards hard.

“Some of us have played together five or six years so we have good chemistry,” he added. “We understand each other. It’s easier playing together when you have chemistry.”

Powers hopes to play basketball in college. He is a three-sport athlete. He played wingback and outside linebacker on the Lena/St. Thomas football team. He is also a standout baseball player both for the high school team and Marinette American Legion.

“We travel a lot for baseball,” he said. “It’s hard to get in the gym in the summer (for basketball), but I find the time.”

Powers takes pride in being more than a scorer. Coach Ric Powers demands that he and his teammates be good defenders.

“He’s all about defense. That’s what he strives for every game,” said Powers. “We have to get better in that area. Our scoring is there, but we have to be better on D.”

Powers is a student of the game. He watches videos of other players and attends other high school games when possible. Among his high school career goals is to score 1,000 points. His current focus is to continue to improve.

“I just want to keep getting better each game,” he said. “We want to have a good season. It’s a great feeling winning and playing with these guys. We’ve been through a lot. We know each other well and have been friends for a long time. We just need to keep doing our best to prepare and to keep getting better.”