With the help of parish volunteers, Fr. Jugenheimer oversaw the creation of 42 stollens, which were sold for $12 each at the parish’s annual holiday bake sale Dec. 15 and 16. It was the second year the parish has mass produced stollens for the bake sale. “Two years ago, I made several myself and brought them over to the bake sale,” the priest said. “They disappeared very quickly. That’s when I thought, ‘Let’s try to make 30 or 40 of them and see what happens.'”

Last year, the parish sold 30 stollens. This year, after taking pre-orders, a dozen more were made and sold. 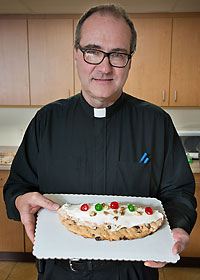 Fr. Jim Jugenheimer, pastor of Most Blessed Sacrament Parish in Oshkosh, holds a Christmas stollen that he made using his grandmother’s recipe. He oversaw the baking of 42 stollen, which were sold at the parish’s holiday bake sale last weekend. (Sam Lucero | The Compass)

According to Fr. Jugenheimer, his first attempt at making stollen was about 25 years ago during his first priestly assignment. “My own personal record was making 18,” he said.

One of his cherished possessions is a handwritten copy of his grandmother’s stollen recipe. “But as in any recipe from these venerable people, they write down the ingredients but there’s also unwritten things,” he said. “The first few I made weren’t the best. You have to try to remember what their technique was.”

Like other Christmas delicacies, making stollen takes a lot of time. “Basically all of your German stollens are made of very sweet dough with fruit kneaded into it,” said Fr. Jugenheimer. “It’s not something you’re going to whip up in an hour. The patience part is making sure it rises correctly.”

The process of making one batch of stollen, which consists of three fruitcake loaves, is about six hours, he said.

“I think it’s more a labor of love,” added Fr. Jugenheimer. “If you are going to make these, it’s going to be a good chunk of your time … and then you cross your fingers and hope it works. There’s always 100 things that could go wrong.”

According to Fr. Jugenheimer, the Christmas stollen, like many other holiday ethnic foods, has a religious connection.

“The full name is the Christstollen. The word Christ is attached to it and it actually resembles the baby Jesus wrapped in swaddling clothes,” he said. “If you use your imagination, you can see that.”

The first Christmas stollen was reportedly made in 1427 and was not a sweet holiday treat. Because Advent was a time of fasting, no sugar, milk or butter was used.

It took a papal decree to allow royal bakers in Saxony to use butter. The letter from Pope Innocent VIII in 1490 became known as the “butter letter.”

Today, stollen, made in the city of Dresden, Germany, is made by 150 Dresden bakers and marketed as the country’s official stollen.

“I haven’t perfected that one yet,” he said. “We are talking about making that one maybe next summer” as another parish benefit.