The procession of cars and walkers began at the Newton Post Office and made its way through snow-covered county roads. Led by a pick-up truck with U.S. and Mexican flags mounted to its safety rack, with Spanish religious hymns playing from a stereo, the group walked more than one hour to reach the church. 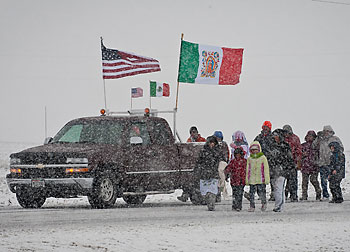 Members of St. Thomas the Apostle Parish in Newton, Wis., marked the feast of Our Lady of Guadalupe Dec. 9 with a three-mile procession in the snow. About 50 people participated in the procession of walkers and vehicles from the Newton Post Office to the church, where a Spanish Mass was celebrated. (Sam Lucero | The Compass)

Upon arrival, the wet and cold pilgrims processed into the church singing “Las Mananitas” and holding pictures of Our Lady of Guadalupe.

According to Sr. Marlita Henseler, St. Thomas the Apostle parish director, the parish has held celebrations marking the feast of Our Lady of Guadalupe since it merged with St. Joseph Parish in Alverno, located near Silver Lake College, about 10 years ago. She said the parish has between 125 and 150 regular Hispanic parishioners, most of them with Mexican roots, which is why the feast of Our Lady of Guadalupe is an important local celebration.

Sr. Marlita, a Franciscan Sister of Christian Charity, is fluent in Spanish, having served 12 years as principal of a large Catholic elementary school in Lima, Peru. She has been parish director in Newton for four years.

Before Mass, which was celebrated in Spanish by Norbertine Fr. Bill Ribbens, the community gathered in the worship space for a reenactment of Our Lady of Guadalupe’s appearance to Juan Diego. Confirmation students Fredy Mercado and Joselyn Torres played the central characters in the skit. An image of the patroness of the Americas was erected in the worship space and parishioners took turns placing roses near the statue’s base and kneeling in prayer.

“The devotion of the Hispanic community is so real to Our Lady that this celebration as one family is something that just draws them together,” said Sr. Marlita. “The honor that they give Our Lady of Guadalupe is central to their Catholic faith.”

Other parishes in the Green Bay Diocese held special celebrations marking the feast of Our Lady of Guadalupe. They included St. Therese in Appleton; St. Philip, Ss. Peter and Paul and St. Willebrord in Green Bay; St. Mary in Omro and St. Joseph in Wautoma.