At ecumenical service, Methodist bishop describes Jesus as a God of peace, justice 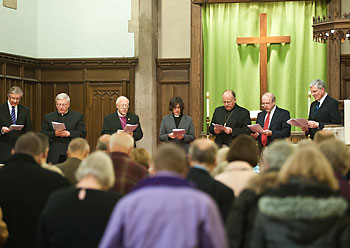 Bishop David Ricken, second from left, joins other Christian leaders for an ecumenical worship service Jan. 23 at First United Methodist Church in Green Bay. More than 100 people turned out to participate in the service. (Sam Lucero | The Compass)

Bishop Jung, a native of Kwang hwa do, Korea, served as a pastor in the Green Bay area before his election to the Methodist episcopacy in 2004. In his opening remarks, he praised Bishop Robert Banks, Bishop David Zubik and Bishop Robert Morneau for their leadership in the ecumenical field.

“They were all such great colleagues who nurtured my journey in this area and I’m cherishing that beautiful memory,” he said.

Bishop Jung noted Christians are asked to respond to a “divine call.” 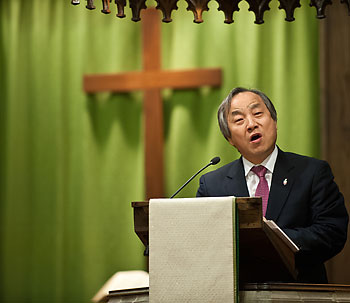 “It depends on our specific role or function in the church and the talent that God has given to each,” he said. Quoting from 1 Corinthians — “When I became an adult I put an end to childish ways” — he said one’s faith also changes as one grows in maturity.

“I know my faith perspective is different than that of my childhood and young life,” said Bishop Jung.

He recalled growing up in South Korea, where he was taught to fear people in North Korea. “I led my classmates in military exercises. I did not get the words of the Prophet Micah: to do justice, to love with kindness and to walk kindly with your Lord. I had not heard the words of Jesus, love your neighbor as you love yourself.”

Bishop Jung grew up in the Confucian/Buddhist tradition, which “did not endorse what I was taught. What I was taught came not from my faith but from fear. Fear the other I was taught, again and again.”

He said this fear was reinforced when a friend found an object while at the beach. “He reached for it, it exploded and killed my friend,” he said. “So my fear of others was reinforced.”

Bishop Jung became a Christian at age 16. But he continued living in fear and seeing his newfound faith as a way to get to heaven.

“At its early stage, my faith had not much to do with how I should believe in relation to others, but how I could escape eternal torment,” he said. “There were many steps along the way and I grew.”

But as he grew, he said, “I came to see that what Jesus lived and taught was consistent with my Buddhist ancestry. Jesus knew there were others who thought of him as an enemy, but Jesus treated no one as an enemy.”

His understanding of Jesus as a God of peace and justice, rather than a God of retaliation or fear, transformed him, he said.

He said that these “competing theologies” exist in how society views gun control.

Bishop Jung shared a story about a man in Milwaukee who was a regular diner at a restaurant. “About two months ago he realized that several of the regulars at the lunch counter were coming to breakfast carrying guns,” he said. “Seeing their guns, he concluded, ‘This is not a place where I feel safe.’

“Those who believe they need to be armed are living in fear of the enemy,” continued Bishop Jung. “The NRA has a public campaign that says the only thing that stops a bad guy with a gun is a good guy with a gun. Thus, the logic is that every public school should have guns present and ready.”

“When Jesus was arrested in the garden, one of his disciples took out the sword and cut off the (centurion’s) ear,” said Bishop Jung. “Jesus healed the soldier and refused to use violence to counter violence. We thus celebrate Jesus as our Lord … because of his triumph over violence.

“According to Jesus, Micah got it right,” concluded Bishop Jung. “What does the Lord require of you but to do justice, to love kindness and to walk humbly with your God?”