“I found out about it about a week after the final four,” said Ribeiro in a phone interview with The Compass. “There’s a large pool of talent. I’m happy for the opportunity to play. Everyone is hoping to get coaches to look your way.” 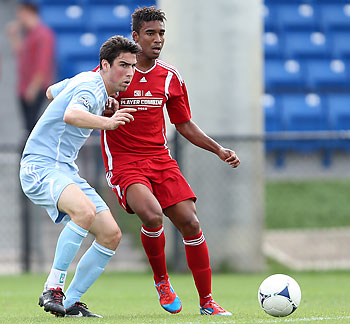 Players were divided into four teams for doubleheader matches each day.

Representatives from all 19 MLS teams were on hand to evaluate the prospects.

Ribeiro, a midfielder/defender for the Blue Jays, wrapped up a decorated collegiate career this past fall. He was named a 2012 first team All-American by the National Soccer Coaches Association of America, the Missouri Valley Conference (MVC) Defensive Player of the Year, an all-MVC first team selection and an all-MVC Tournament selection. Ribeiro scored the winning goal against SIU Edwardsville in the 2012 MVC Tournament championship game. He was also a co-captain this past season and led Creighton in minutes played. The Blue Jays advanced to the College Cup (final four) in both Ribeiro’s junior and senior seasons.

Not bad for a player who joined the Creighton program as a walk-on. Ribeiro climbed to NCAA elite status over his four seasons. As a freshman, he only played in four games. He made six starts in 18 games played as a sophomore before starting all 48 games the past two seasons. Ribeiro finished his college career with 10 goals and three assists.

The two-round MLS SuperDraft was held on Jan. 17 in Indianapolis. Ribeiro was projected as a possible late second round pick based on not only his prowess at Creighton, but his play last summer with the Portland U-23 club in the Premier Development League. He was not selected in the initial draft, but his name was called on  Jan. 22. The New York Red Bulls drafted him in the fourth round of the MLS Supplemental Draft.

“The MLS is the ultimate goal,” said Ribeiro. “If I’m playing (in the MLS), I will have to put school on hold. That will be sort of bittersweet because I will have to go back to finish up and graduate.”

Ribeiro, who received academic all-district honors in both 2010 and 2011, is majoring in nursing at Creighton. He hopes to become a nurse anesthetist after his soccer days are over. His transition to Creighton was a smooth one due in part to his experience at Notre Dame, where he was second team all-state, a two-time team MVP and a four-year letter winner who helped lead the Tritons to WIAA Division 2 state championships his junior and senior seasons.

“I wouldn’t change a thing,” he said. “I am definitely glad that I decided to go to Notre Dame. It prepared me both academically and socially for college.”

Ribeiro added that his mother, Karen VanGemert, keeps him updated on Notre Dame soccer. He was pleased that the Tritons advanced to state this past fall.

“I played with (De Merit) at Synergy, the new indoor facility,” said Ribeiro. “I got a chance to talk with him. He wished me luck.”

The warm weather in Florida was a nice change from Wisconsin, he added. Ribeiro didn’t receive any insights about which teams were interested in him. He is simply looking for another opportunity.

“I want to take that next step,” he said. “That’s the goal. It’s exciting to be in this position.”