He has a recipe for community building

In minutes, Mauthe, a chef by training and profession, expects the hall to be crowded with mourners attending the funeral of a well-liked and respected church volunteer. 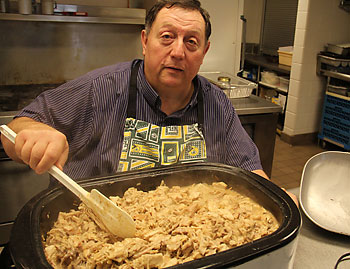 A long-time volunteer himself at St. Patrick, Mauthe wants everything to be just right for the gathering.

Barely a month before, the hall hosted the parish’s annual Christmas Sweet fund-raiser. The event included dozens of Ball mason jars filled with the dry ingredients to make cookies, brownies and other sweets from recipes in Mauthe’s cookbooks.

“One of the lessons Jesus taught us is that sitting down and sharing a meal helps build our community of believers,” said Mauthe, who uses food along with his culinary skills and knowledge to pursue a long-time personal mission to build the St. Patrick parish community.

A little over nine years ago, Mauthe was one of two men who began the popular Friday fish fry at St. Patrick.

“We didn’t do it for the money. When you get a lot of people coming together for a fish fry they sit and begin to talk to one another. They start socializing. We wanted to build the parish community and it’s really paid off,” Mauthe said. “You see it in church every Sunday. People love to talk to each other before church starts. And our volunteer base is huge. It’s a community of believers coming together.”

But about the same time Mauthe spearheaded the start of Friday fish fries, his life took a life-changing turn.

Mauthe, 60, is a graduate of the Culinary Institute of America (CIA) in New York and served for more than two decades as the executive chef for Wisconsin governors, among them former governors Tommy Thompson and Scott McCallum.

When he wasn’t needed in Madison, Mauthe taught cooking skills to residents of the Winnebago County Mental Health Institute.

“But what I honestly wanted to do was to own a restaurant, I never really wanted to work in one,” he said.

So Mauthe and his wife, Barb, moved to Neenah and started a home-based catering company serving high-end and private parties.

“I did well and loved doing it,” he said.

Despite a professional distaste for the fast food industry, Mauthe nonetheless took a job as regional chef for 22 Kentucky Fried Chicken franchises, but found the position rewarding as he worked training young people, some struggling to find a positive path in life.

“I knew those kids could flourish. Some of them actually became restaurant managers,” Mauthe said.

The couple joined St. Patrick Parish in 1972. Barb Mauthe served the parish as religious education coordinator for 17 years before becoming secretary at St. Joseph Parish in Appleton. Larry Mauthe served in a number of volunteer roles over the years at St. Patrick, including the parish and financial councils and the social justice committee. He served as president of the St. Patrick Grade School Home School Association and chaired the annual parish bazaar and Paschal Meal event, the liturgy committee and parish bingo and welcoming committees He was also a founding member of the parish events committee.

The couple opened their house as a foster home and served more than 20 youths while raising three children of their own.

Their son Michael is currently principal at Lourdes Academy High School in Oshkosh.

“We tried to teach our kids that having faith is more than just going to church every Sunday. It’s the way you live. Be Christian and Catholic by example,” he said.

Mauthe’s faith suffered a jolt and his usual outgoing and light-hearted personality turned to depression nearly a decade ago when he was diagnosed as suffering from a degenerative neuromuscular disease.

“In the beginning I prayed and prayed the diagnosis was a mistake. I always tried hard to live my faith. I said to myself, ‘This diagnosis can’t be correct, so I’ll pray and pray until it’s corrected.’ It was the first time in my life I was looking for a result from a prayer,” Mauthe said.

“I said ‘OK.’ But I thought he wasn’t going to tell me anything I didn’t already know,” Mauthe said. “The first thing Fr. Geenen said was ‘Don’t get mad and don’t hit me, but I want you to thank God twice a day for your disease.

“That made me feel like he was discounting my disease. I felt angry, but then he said sometimes God answers our prayers before we ask him,” Mauthe said. “Fr. Geenen asked me what if my wife or children had developed the disease? I would have asked God ‘Why my wife or child?’ Let it be me instead.’ God has answered my prayers. It was a life-changing moment. Coping with my disease has been easy ever since.”

“Talking to Fr. Geenen changed my faith completely. I had a faith that was not as accepting as it should be,” Mauthe said. “It took me from grieving for what might have been to celebrating what is.”

Although Mauthe can’t carry heavy loads long distances, must use a walker and has lost some fine motor skills, his disease hasn’t diminished his resolve to build and maintain an active parish community.

Mauthe’s long-time dedication to building a strong faith community through the preparation and sharing of food has helped him to cope with his disease as others turn to help him.

“One true meaning of a church to me is to have the support of the community of believers,” Mauthe said. “You can’t have that support if you don’t know each other. It’s impossible to share the tragedies and triumphs of life with strangers.