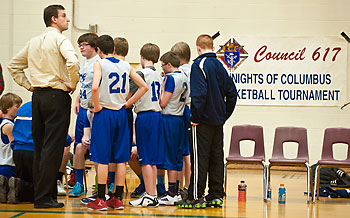 Members of St. John the Baptist School basketball team take a time out during their game against Holy Family School in the Knights of Columbus Eighth Grade Basketball Tournament at Notre Dame Academy Jan. 23. (Sam Lucero | The Compass)

“I remember when I lived in Two Rivers, St. Mark’s had an undefeated team,” he explained. “They received a call to play in the Knights of Columbus tournament, but they couldn’t travel due to lake-effect snow that day. That had to be ’54, ’55 or ’56 because I was a correspondent to The Register at the time and I was sending stories in about the basketball team.”

Larry Hermes, who not only works tournament games as an official, but also coordinates the officials, said his playing days in the tournament for St. Patrick School of Green Bay date back to the early 1950s. Hermes also coached in the tournament, leading a St. Jude team, featuring his son, Rick, to the championship in 1981. Dufano praises Hermes for his years of dedication.

“If we need an official at any time, we can just call Larry,” he said. “He’s got everybody’s phone number and he’s always willing to help.”

Dufano added that the volunteers who work the scorer’s table — Basil Lepak, Lee Hermsen, Larry Zambrowicz and John Martinkovic — are also “automatic year after year. You know they are going to do it.”

Many of the advertisers in the tournament program return each year as well. Any proceeds from the event benefit charities supported by the Knights of Columbus including Paul’s Pantry, the diocesan seminarian program, pro-life organizations and opportunities for those with special needs.

Ken Flaten helped coach the St. John the Baptist squad to a third place finish in this year’s tourney. He has fond memories of playing in the tournament in 1973 as an eighth grader for Annunciation School. Flaten, athletic director at Notre Dame Academy, has followed the tournament since 1984 when he began working at then Premontre High School. He’s thankful that his youngest son, Jordan, had the opportunity to take the floor in the old gym this year.

“I used to bug Ray that they need to have this thing last until (Jordan) got a chance to play in it,” he said. “Now we need to get it to the official 50. The gym is being renovated, so next year, this will be a brand new facility. The gym will be renovated to ‘Alumni Gym’ with a new floor, new bleachers, new everything. It’s important that we keep this going. There have been some big-time basketball players who have played in this tournament.”

Among the top players in the tournament’s history was Craig Haese, who helped lead East De Pere Middle School to the tournament championship in 1993. Haese went on to score 1,600 career points at De Pere High School and enjoyed an outstanding collegiate career. He was inducted into the Youngstown State University Athletic Hall of Fame in 2011. Haese, who now teaches at Wrightstown Middle School and assists his brother, Cory, with the varsity basketball team at Wrightstown High School, recalls the magnitude of the tournament.

“That was a long time ago, but I do remember the tournament and the importance leading up to playing in the tournament,” he said. “In the early ’90s all the middle school basketball players looked forward to playing in the Green Bay Knights of Columbus Tournament because we thought of it as the Green Bay metro area city championship for middle school basketball.”

Haese added that the tournament was also special because it was the last time he played for a team coached by his father, Carl. He doesn’t recall details of the games, but remembers a tight contest with the Oneida Nation team and playing a good Holy Family team.

“I also remember that the tournament was run first-class from its volunteer workers to the referees,” he said. “Each game seemed like a playoff game with the excitement from the crowd and players. I remember, after winning the championship, getting asked to sign autographs for the first time by a mom and her young kids that I didn’t know.”

Public school teams participated in past tournaments, but the heart of the field has been parochial school squads, primarily from the area Catholic schools. This year, eight Catholic school teams were joined by Pilgrim Lutheran of Green Bay. School closings and consolidations have led to a smaller number of teams, said Dufano.

“We used to have 16 with no problem,” he said. “I would contact coaches and they would tell me that they were waiting for the call. These are all regular school teams. We don’t take all-star teams.”

Many of the players go on to play on traveling teams as feeder programs for the high schools. The school teams provide an opportunity to play with a group of classmates.

“It’s a good tournament with a good reputation,” said Michael Schumacher, a member of the championship St. Matthew squad. “It’s fun. Some of us have been together since pre-school. We’ve been ballin’ it up since first grade.”

“We’ve been with each other for a long time, so it’s really nice to represent our school,” said teammate Max Liegel. “My brother played here two years ago so I remember watching him. We really wanted to win this. It’s an honor to play here.”