“In my country we don’t speak about abortion so openly. You never hear anything in public. Nobody wants to talk about it,” Lackova said. 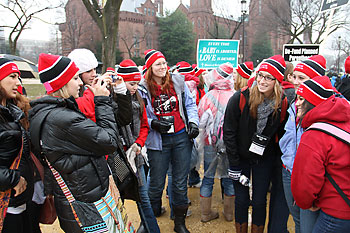 Students from Xavier High School in Appleton are pictured at last year’s March for Life in Washington, D.C. About 75 Catholic high school youth from the Green Bay Diocese are among those who will attend this year’s event. (File Photo by Steve Wideman | For The Compass)

Lackova is one of 75 high school students and 100 adults from the Green Bay Diocese preparing to travel to Washington, D.C., to participate in pro-life youth rallies and join an estimated 400,000 people in the 40th annual March for Life on Jan. 25.

“I’ve never been in a large procession except to receive the Eucharist and to participate in candlelight processions for Our Lady of Fatima,” Lackova said. “I’m really looking forward to going to Washington, D.C., and being with all the pro-life people.”

Participating in the March for Life is not just a trip for students, said Mary Beth Meehl, a religious teacher and coordinator of the Rock 4 Life Club at Xavier.

“It’s a pilgrimage, a retreat expedition for these young people,” said Meehl, who is in her eighth year of leading student groups to March for Life. “We live in a culture of death and we try to make the students aware of it.”

Lackova said she’s gained an education about the culture of death since arriving at Xavier and joining the Rock 4 Life Club.

“People here in the United States are much more open about their religion and willing to talk about abortion issues. At my first Rock 4 Life meeting I was shocked. … I was very surprised people were so open and talking about it,” Lackova said. “I wrote a paper about abortion and actually realized how evil it is.”

Lackova said she is looking forward to returning to Slovakia and beginning discussions about abortion.

“I’ll probably start with my closest friends, just talk to them about the evils of abortion. Then I’ll talk about it at school and maybe in my parish,” Lackova said. “I believe we (youth) will change the world. I’ll be just one of hundreds of thousands of people at March for Life, but every person is important. To see all those people united in one thought and fighting with words, not violence, it will be inspiring.”

Students returning from March for Life typically return with a sense of empowerment regarding abortion issues, Meehl said.

“They know what is right and wrong and know they have to make a stand. They come home and they witness. It’s converting one heart at a time,” Meehl said. “Adults can witness all they want, but when young people stand up and witness that stops people in their tracks.”

The youth group, along with 20 adult chaperones and four diocesan priests, will share an evening prayer service with Bishop David Ricken at St. Augustine Church on Thursday, Jan. 24, sponsored by the Archdiocese of Washington D.C.

The group joins an estimated 28,000 youth from around the country for a rally and Mass at the Verizon Center on Friday, Jan. 25, a few hours before the march.

“It’s a life-changing experience no matter how many times you go,” said Kaity Sagan, 18, a Xavier senior who traveled to the March for Life her freshman and sophomore years and is active in pro-life activities at school.

“You get a huge perspective on how many young people want abortion to stop. I was amazed,” Sagan said.

The year’s March for Life marks the 40th anniversary of the U.S. Supreme Court’s decision to legalize abortion in the United States.

“I’m amazed this (fight to overturn Roe v. Wade) has gone on as long as it has,” Sagan said. “Our generation has figured out, ‘Oh my gosh. If so and so’s mom had aborted my friend, I would have never met and got to know them.'”

The March for Life begins at the National Mall and travels up Constitution Avenue to the Supreme Court building, where many groups stop to chant or say a prayer.

“I don’t know if the justices will be there when we pass the Supreme Court, but I hope they are and see us all pass by and know what we are fighting for. Maybe that will change some minds,” said Luke Reinke, 18, a senior at Xavier who is making his second consecutive trip to March for Life.

According to the National Right to Life organization, there are currently 1.2 million abortions in the U.S. every year, a statistic Reinke said youth are working to reduce or eliminate.

“There is strength in numbers and more and more young people are learning how bad abortion is. There are kids out there who want to make a difference,” Reinke said.

Reinke said Bishop Ricken’s presence at the youth rallies and march bolsters the resolve of youth to fight against abortion.

“The bishop coming to Washington reinforces the message this is a cause we need to fight for and keep pursuing,” Reinke said. “We believe abortion is wrong. There are so many people who believe abortion is wrong and we will all be out there, hundreds of thousands of us, sending that message to Congress. I hope our presence proves to Congress that people don’t agree with Roe v. Wade and things need to change.”