But to area Catholics, the presence of God in the chapel and hospital is apparent, beginning with a statue of St. Joseph nestled in an outside wall of the three-story hospital overlooking the nearby Wolf River and almost exactly above the chapel far below.

“From 1931 to 1975 this was St. Joseph Hospital run by the Sisters of the Religious Hospitallers of St. Joseph,” said Dolly Knapstein, a hospital volunteer and one of 12 people, along with her husband, Ronald Knapstein, who played an important role in returning a chapel to the hospital after a 37-year absence.

The hospital was built in 1930 with the chapel an integral part of the facility and the New London community, Knapstein said.

“Mass was held early every morning and the chapel served as a place for meditation for patients and families and hospital staff. There were even weddings performed there,” Knapstein said.

She said the chapel closed in 1975 when the hospital was sold to the city and became a community hospital.

“We tried for years to get the chapel back,” Knapstein said. 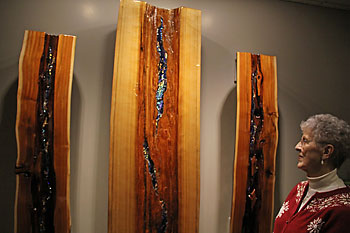 Dolly Knapstein admires a sculpture at the New London Family Medical Center that she and other Catholics interpret as representing the Holy Trinity. (Steve Wideman | For The Compass)

For most of those years a public waiting area on the hospital’s third floor served as a makeshift chapel for families looking for a place to grieve, pray or to see their clergy, she said.

“But children would be playing, the television would be going. It wasn’t very appropriate,” Knapstein said.

There was also a small room, nothing resembling a chapel, near the emergency room where Knapstein spent several difficult hours in 2005 when her first husband, Claude Alberts, died.

“When I was in that room I thought, ‘This is it. We need something different,'” she said. “As a hospital volunteer people would come up to me and say things like ‘My mother is so sick. Where can we go to pray for her?’ I had to tell them we had nothing,” Knapstein said.

The Wolf River Healthcare Foundation announced in 2011 a project to reopen a chapel in the hospital.

Dolly and Ron Knapstein were appointed to a 12-member panel charged with designing the chapel.

“We represented the Catholic viewpoint in the design,” Knapstein said.

Although the chapel was to be ecumenical, Knapstein said efforts were made to include several things important to Catholics, including getting a tabernacle (which holds the Blessed Sacrament) and crucifix.

“A couple of people on the planning committee said ‘Well. It’s really nondenominational.’ I told them ‘Don’t take God out of this chapel and hospital. If you take Jesus Christ out it won’t be a chapel. You’ll have a lot of unhappy Christians around here, especially the Catholics.’ So we got the tabernacle,” Knapstein said.

The ecumenical chapel opened nearly seven months ago after a remodeling of the old kitchen by hospital maintenance staff and with support by the hospital, now owned and operated by ThedaCare, and the foundation.

Sr. Delores Demulling of the Sisters of Religious Hospitallers attended the 2012 dedication ceremony.

“We are so happy that Christ is back in the hospital,” Sr. Delores said in a telephone interview from Antigo, where the order serves Langlade Hospital.

Sr. Delores said that when the hospital was sold in 1975, all religious icons were removed from the facility. But 30 years later the people started asking for a return of religion to the hospital.

“It showed the need for spirituality among those who are sick and those who are companions to the sick. This is Christ’s healing mission. It’s in the Gospels,” Sr. Delores said.

Ilene Berger, a registered nurse who works in the hospital emergency room, said the new chapel is used not only for people coping with medical issues facing friends and family members, but also by hospital staff seeking a place to meditate.

“I show families down there when we have a death in the emergency room so they can be together and call their clergy and have devotions. It’s a very needed spot,” Berger said.

In what could be called a “Catholic closet,” a tabernacle, picture of Jesus Christ and a small crucifix were placed in a nook barely large enough for a person with small shoulders to enter.

“We got our tabernacle and that’s what we really wanted,” said Knapstein, who regularly distributes Communion to hospital patients.

An eternal light shines from a fixture mounted within the closet-sized area, the result of lobbying efforts by the late Fr. David Lewis, pastor for 12 years at Most Precious Blood Parish in New London.

“The tabernacle was dedicated in honor of Fr. Lewis. He’s our angel because when he first came to New London, he said, ‘We need a chapel in that hospital.’ This is what it’s all about, bringing Jesus to the world,” Knapstein said.

The chapel also includes a pair of stained glass windows that came from the original chapel. One window depicts wheat and the other grapes.

The main feature of the room is a sculpture consisting of a trio of slabs from pine logs harvested from the forest near Shawano. Appleton artist Linda Muldoon, who was instrumental in designing the sculpture, said the three logs have no specific religious connotations, but represent the importance of water to the area and to life.

Catholics clearly have a different point of view.