They fight hunger one meal at a time

Rita first took on this volunteer endeavor 17 years ago. In the early 1990s the couple had brought Rita’s mother, Mary Van Den Heuvel, into their home after her diagnosis with cancer. She died in 1994, and it was a hard blow to Rita that took time to recover from. So when she saw a notice in St. Mary’s parish bulletin in 1996 that said if they didn’t get more help, the parish would have to give up its volunteer efforts at what was then known as Room at the Inn, which served homeless persons in the community. Something about that appealed to Rita, so she decided she would bake for the July meal. 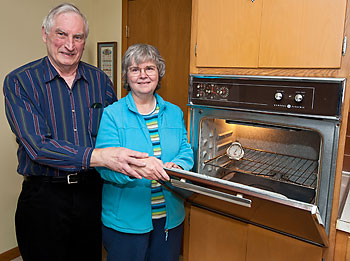 She skipped August, and again in September the parish bulletin said if they didn’t get help they would have to give up the volunteer effort.

That’s when Rita decided to commit to one year of baking desserts.

“I said, ‘You are nuts,'” Alan remembered with a grin. Back then, the Room at the Inn was serving meals to about 90 people each night. In those days it was mostly cookies and quick breads Rita would prepare.

Today, the Devroys, who have been married for 47 years, usually serve 200 desserts a month, but Rita usually bakes 50 more. Those not served are dropped off at the Golden House, which serves the needs of those escaping domestic violence.

In December, Rita made 34 pies, and that means she had to have her first two pies in the small oven that is original to their 1957 house by 9 a.m. Sunday. That way she is finished by 9 p.m. Sunday. Some months she makes tortes. Cookies and quick breads are now the “extras” she bakes.

It’s a big organizational endeavor that Rita said usually begins on the Friday before their Monday to volunteer. They bring up the extra tables from the basement, clear out the refrigerator, and get to work. Yes, they have been offered financial assistance, but they feel even on their modest income, this is just something they can do to make a difference.

“We don’t have as much as some people, but you are so thankful for what you do have,” said Alan, later adding, “This is just our little thing to give back.”

Rita worked as a cook at St. Mary School in De Pere while the couple’s sons, Keith and Kevin, attended school there. That’s where she learned a lot about cooking and baking for large groups.

Their monthly visits to the NEW Community Shelter are something they so look forward to. “It’s a humbling experience,” said Alan. “They take everything that is offered to them because they are so hungry.” He is also a good listener who looks forward to bringing a kind word to people. “That was baked just for you,” he said he’ll tell people as he serves up their desserts. They point with pride that their granddaughter, Karissa, 13, has often volunteered with them as well.

“There’s hunger in Green Bay,” said Rita, “more than you can possibly imagine.”

The need is great, continued Alan, and both of the Devroys encourage others to help. Meals are available to those who qualify; not only those who are homeless, but for those who simply can’t afford food or can’t cook for themselves. There are families with children, there are disabled persons, there are the elderly — and their appreciation is great, said the Devroys.

This experience has enriched their faith lives. “We are so blessed,” said Rita. The years 2011 and 2012 brought health challenges to Rita, and even as she awoke in the intensive care unit her mind she said turned to her baking commitment.

They encourage anyone who has time on their hands to find something they can volunteer with to make a difference in their community. “Just do it one time whatever you are comfortable doing and it will be so fulfilling and you will see the need and you will keep doing it,” said Rita, adding, “You will be rewarded tenfold.”