Zimmers are models of stewardship

“We’re not looking to be recognized for any of the things we do — we’d rather fly under the radar,” Joe said. “We do things for people simply because we choose to and because we think it’s the right thing to do.” 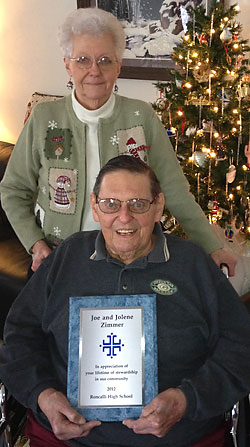 However, the Zimmers’ years of service couldn’t fly under the radar forever.

The administrators at Roncalli High School in Manitowoc made sure of that when they honored the Zimmers in November with the Roncalli Community Stewardship Award in front of hundreds of appreciative students, staff and community members at the school’s Zimmer Auditorium.

“They’ve given decades of good stewardship and service, so it’s only fitting that they received the award,” Roncalli president John Stelzer said. “In Joe and Jolene’s case, they’re extremely involved in the parish, the volunteer system at Holy Family Memorial (hospital) and at Roncalli.

“The award is meant to honor those who go above and beyond in regards to stewardship in the community. The award holds them up as example of good stewardship,” added Stelzer.

Indeed, Joe, 79, and Jolene, 74, are still actively helping others well into their retirement years.

Joe has served on Roncalli’s endowment committee since its inception about 40 years ago.

He also was a trustee and treasurer at Holy Innocents Parish in Manitowoc for more than 30 years and is a member of Golden K Kiwanis, Noon Optimists and the local Elks Club.

Jolene has been volunteering regularly at Holy Family Memorial in Manitowoc since 1995. She now helps patients get in and out of wheelchairs and transports them throughout the hospital.

“When I’m through at the hospital each day, I know I’ve done something good for somebody else,” she said. “It’s a good feeling you get from volunteering.”

She also has served on the HFM fund development board for several years, and for numerous years was a member of the board at Manitowoc’s Holiday House, whose mission is “to promote the advancement and dignity of individuals who are affected by disability or handicapping circumstances.”

“Like (Joe) said, you volunteer your services just because you have that feeling in your heart,” Jolene said. “That’s why we do these things. You don’t expect to be recognized for what you’ve done for people, because that’s not why you do it.”

All three of the Zimmers’ children went to Roncalli High School, which is why the school holds a special place in their hearts.

Joe noted that all of his brothers and sisters went to Catholic high schools, and they also pursued Catholic-based educations after high school.

One of Joe’s brothers, the late Fr. Bill Zimmer, was well known as an ecumenical leader, a champion for social justice and a catalyst for Hmong and Hispanic ministries in the Manitowoc area. In 1995, the Interfaith Academy of Parish Clergy named Fr. Zimmer its National Pastor of the Year.

Joe said he’s forever grateful for receiving a Catholic education — he graduated from St. Norbert High School in 1951 and St. Norbert College in 1956.

“When my dad died — he died at age 62, he had pancreatic cancer and was sick for only a couple of months — he said to me, ‘Don’t expect a lot in my will, but I’m going to give you the best education that I can give you,'” Joe said.

“I am a big supporter of a Catholic education. I just love to give money and provide help where it’s appreciated, and it’s certainly appreciated at Roncalli and St. Francis (of Assisi Parish).”

The feeling is mutual, Stelzer said.

“Roncalli feels blessed to have the support of people in our community like Joe and Jolene,” he said.