“We are doing it (suspending Mass) for the safety of everyone. We haven’t seen bats inside the church, but why would we take a chance that one might find its way into the body of the church? Safety is the number one priority,” Ver Voort said. 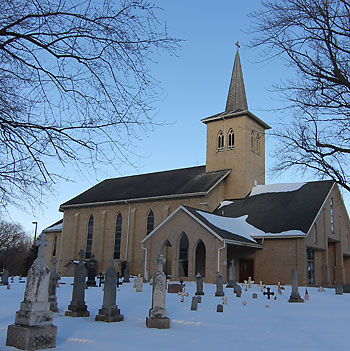 A view of Holy Spirit Church in Darboy, which will suspend church activities beginning March 4 to replace a leaky roof and rid the building’s attic of bats. The flying creatures are a health threat to humans and are protected under state law. (Steve Wideman | For The Compass)

Parish members have the option of attending Sunday and weekday Mass at the Kimberly church of Holy Family Parish. School Masses will be moved to the school gymnasium in Darboy.

The Darboy discovery comes eight years after a bat bit a 15-year-old girl during Mass at the former St. Patrick Church in Fond du Lac.

The girl, Jeanna Giese, attracted international attention as the first person in history to survive rabies without rabies vaccine injections before or after exposure.

Getting rid of the bats, which are protected under Wisconsin law, could be tricky and depend on the weather and the bat’s sleeping habits, said the owner of a firm specializing in removing critters occupying human dwellings.

“You can’t just go in there and kill all the bats. Under state regulations the only way you can get rid of bats is to physically exclude them. And right now, bats are hibernating,” said Dave Bree, owner of Fox Valley Wildlife Control in Appleton.

Bree said bat exclusion, whereby bats are allowed to fly freely out of a building but not allowed to fly back in via a one-way door, is most commonly used to rid buildings of bats.

Bree said bats can squeeze through a hole not much larger than a dime.

“A little brown bat can get through an opening a quarter-inch high and one and a half inches long,” Bree said.

Bats, which feast on insects and help pollinate plants in their travels, are currently protected in Wisconsin as conservation officials look for a way to control the spread of a bat disease, white-nose syndrome, responsible for wiping out entire populations of bats in other states.

In the 2004 Fond du Lac incident involving the 15-year-old, a single bat began buzzing St. Patrick’s parish members near the end of Mass.

In a short Internet biography at site.jeannagiese.com, Giese describes picking up the bat by the wing after an usher knocked it to the floor as it was flying above the heads of the congregation.

As Giese attempted to take it outside, the bat bit her left index finger. Giese’s parents did not seek immediate medical treatment and she contracted rabies. At one point Giese was given only four days to live. With help from various drugs, she survived after 11 weeks of hospitalization.

“We know there is a healthy population of bats at that church,” said Dorn, who is familiar with the Fond du Lac case. “That’s why we sent information to Holy Spirit to educate the members of the congregation on things like if they see a bat to avoid it. People are always interested and curious, but you should not pick up a bat bare-handed. You need appropriate protection.”

Both the county health department and Green Bay Diocese officials strongly recommended the parish discontinue Mass and other activities in the Darboy church beginning March 4 until work is completed to get rid of the bats, do cleanup work and replace the roof.

“Holy Spirit is doing their due diligence,” said Tammy Basten, director of facilities and properties for the diocese. “They went up there, found the leak and the bats. They’ll have professionals take care of it. In the meantime, you have to relocate Mass. That’s pretty standard. The church is being very proactive.”

Ver Voort said no one expected to find a colony of bats in the attic, despite the church’s age.

“But we know we’ll be able to use our sacred space again as soon as possible,” Ver Voort said.

Although there are many variables in the process of excluding bats from a building, Bree said the general plan is find the bat’s primary access point, seal secondary access points, install a one-way door at the primary entrance and wait, sometimes days, until all the bats leave. At that point the one-way door openings are sealed, the bat droppings and insulation removed and the attic disinfected.

Cost for all the work, including the bat removal, cleanup and roof repairs, is approximately $120,000, according to parish estimates.

Ver Voort said the finance council is making a request to the diocese to withdraw $87,794 from the parish’s “Building the Future Endowment Fund” to cover most of the expenses.

She said the remaining $32,000, which includes replacing the attic’s insulation, plus $13,280 to repave the Kimberly church Pine Street parking lot, will be the subject of a later fund-raising effort.

Steve Wideman | For The Compass

A view of Holy Spirit Church in Darboy, which will suspend church activities beginning March 4 to replace a leaky roof and rid the building’s attic of bats. The flying creatures are a health threat to humans and are protected under state law.