He and the world had indeed heard the news right. For the first time in six centuries, a pope was resigning his office. 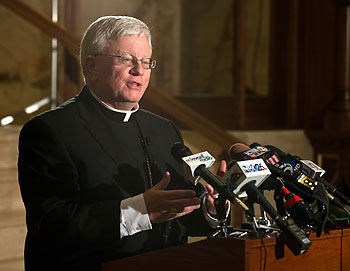 “It was a complete surprise to everybody I know anyway,” Bishop Ricken said.

He hurried back to Green Bay, where he held an afternoon press conference at St. Francis Xavier Cathedral. There he called the surprising announcement, and the burgeoning realization of what it meant for the Catholic Church, “bittersweet.”

However, the bishop added, this is “a time of anticipation to see what the new pastor of the church will be like, to see him assume that role.” He added that whole process of choosing a new pontiff would be “very exciting.”

Bishop Ricken noted that the new pope could come from “just about anywhere,” noting that the church is growing in places like Central and South America, Africa, Spain and Asia. When asked what qualities the cardinal-electors might look for in a papal candidate, he replied they would like for someone who was “strong and vigorous,” someone capable of carrying the heavy mantle that Pope Benedict has now admitted to no longer having the strength to carry.

“It’s a very taxing schedule, even for a younger man,” Bishop Ricken said, “and so the fact that he’s resigning for physical reasons, basically saying this job takes a huge amount of vigor and strength and stamina, so I’m sure the cardinals will take that into consideration as well as they’re planning for a successor.”

Fr. Benjamin Sember, a diocesan priest working in Rome at the Apostolic Signatura, also expressed shock at the resignation. “This was a great shock to everyone, and there is a sense that we are experiencing very historic times,” the priest said. “While it is a great shock, it has also been very noticeable at papal ceremonies that the pope’s voice has been weak and he is lacking physical strength; it seems to take all his effort just to get through one homily.”

Bishop Ricken has met Pope Benedict “about four or five times,” first when the pope was Cardinal Joseph Ratzinger and head of the Vatican’s Congregation for the Doctrine of the Faith. Bishop Ricken worked at the Vatican from 1996 to 1999 in the Congregation of the Clergy. He had met the pope twice last year — in February when the U.S. bishops of the Midwest region had their five-year ad limina meeting with the pontiff and then again in October when Bishop Ricken took a pilgrimage to the general audience.

“I noted that he had physically declined then,” the bishop said of the change he saw between those two visits. However, “his mind was as sharp as ever.”

“I think it says a lot about what value he sees in papacy demands and he realized that he could not continue to minister in that way,” Ebert said. “I really respect that. There’s a point where you know that you don’t have the energy.”

Pope Benedict is one of the world’s leading theologians; he has issued three encyclicals, as well as three books on Jesus of Nazareth. Bishop Ricken said that will be part of what the pontiff will be remembered for.

“Pope Benedict’s lasting legacy is his teaching. He’s an incredible teacher,” Bishop Ricken said. “He’s done a lot of writings in these last eight years. Probably the thing that will last the longest is his efforts toward the new evangelization which is a fancy way of saying to re-propose the Gospel of Jesus Christ, to reintroduce people to Jesus Christ today.”

As the cardinals of the church gather next month at the Vatican to elect Pope Benedict’s successor, Bishop Ricken expressed confidence that “the Holy Spirit will guide the cardinal-electors” and asked Catholics to join him in prayers for Pope Benedict and the cardinals as the process continues.

Greg Parent, a diocesan seminarian studying in Rome, noted that “the city is buzzing with the excitement of the upcoming conclave. One thing is certain though,” he added, “the Holy Spirit will continue to guide the church through the successors of the apostles, in particular the successor of St. Peter. The feeling here is an odd mix of knowing who is leading the church, and wondering who will lead the church.”