The new organization has the blessing of Bishop David Ricken and the Diocese of Green Bay. Bishop Ricken will preside at the Mass for health care providers on Feb. 24. 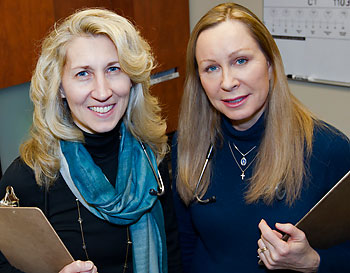 Dr. Robin Goldsmith, left, president of the St. Gianna Molla Guild of Northeastern Wisconsin, and Dr. Susan Allen, vice president and treasurer, invite health care providers to join the guild. The guild’s first activity will be a Mass and luncheon Feb. 24. (Jeannette Merten | For The Compass)

Writer, producer and educator Barbara Nicolosi will be the luncheon speaker. Her topic will be “Hollywood and Christianity.” Nicolosi is founder and chair emeritus of Act One, a nonprofit program to train and mentor Christians for careers as Hollywood writers and executives.

Dr. Robin Goldsmith of Appleton became involved with the Catholic Medical Association chapter in Milwaukee last summer when she was working on a Catholic project. “I joined the guild in Milwaukee and someone suggested I start one here,” she said.

Named for a saint who was an Italian physician, the guild promotes the national association’s mission of “helping physicians grow in the spirit of Christ in their personal and professional lives so they can bring his Spirit to the science and art of medicine.”

The guild’s goals include education in the community and support of others in the medical professions, Goldsmith and Allen said. Anyone working in a health-care profession is welcome, although only physicians are voting members.

“As physicians and others in the medical profession, we bring our knowledge to others in the diocese and beyond,” Goldsmith said.

“We want to educate medical professionals about ethical and moral decisions and issues of today,” Allen added.

The guild also can provide support for other medical professionals who try to lead their patients through some tough life and death decisions, both women added.

“Throughout a physician’s training, you are challenged about how you are going to protect life,” Goldsmith said. “We’re asked, ‘What are you going to stand up for?’ That challenge is there from the beginning. 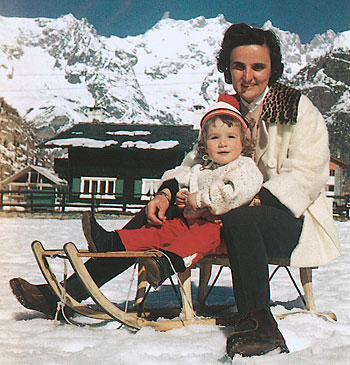 St. Gianna Beretta Molla is pictured on a family outing with daughter Laura in an undated photo. The Italian doctor and mother, who sacrificed her own life for the life of her child, was canonized by Pope John Paul II in 2004. (CNS file photo)

“In medical school, I made it clear that I wouldn’t participate” in some of the practices that go against Catholic teaching, she said. “As physicians we need to make our feelings known clearly. Patients need to know where we stand. This can cause friction, but we do what we have to do.”

For physicians working in Catholic hospitals and clinics, some of these decisions are easier because the institution makes policy on issues such as abortion, end-of-life issues, embryonic stem-cell research and in-vitro fertilization.

“As Catholics become increasingly counter-cultural, it’s good to have the support of others in terms of making decisions,” Allen said. “We encourage practice that is as authentically Catholic as possible.”

She said contraception and end-of-life issues will be in the forefront of what society will face next.

“There are so many tough decisions families face in a crisis or at end-of-life. They need someone to tell them what the faithful approach is,” Allen said. “There will be those who disagree with us. They are always there, but the contrast is stronger now than in the past and will become more so.”

“Medicine is becoming so difficult to understand,” Goldsmith said. “People need to understand what is going on. With in-vitro fertilization, for example, they take an embryo for scientific purposes. These issues are becoming complex even for the physicians. With advances in technology, it is challenging to sort through these issues on a case-by-case basis.”

The St. Gianna Molla Guild was incorporated as a tax-exempt organization in November and was added to The Official Catholic Directory in December.

“We are recruiting members,” Goldsmith said. “People seem excited about this kind of support network.”

“It’s too soon to tell where this is going to go. We hope there will be a lot of interest,” Allen added.

The guild is open to anyone who is interested in these issues, not just Catholics, and not just health-care professionals.

Guild organizers are prepared for criticism and resistance from some segments of society. “I suspect we will run into resistance from the culture as we go forward,” Allen said. “We stand for life.”

Both women say they are concerned about being faithful to the church in their professional and personal lives. This is an opportunity to encourage others in the same way, they said.

“We both love our faith,” Goldsmith said. “I love being Catholic and I want to build that love (within) our colleagues and have dialogue within the diocese.”

Both physicians are anesthesiologists. Goldsmith is with Theda Care; Allen with St. Elizabeth Hospital.

The local guild is named for Gianna Beretta Molla (1922-1962), who was canonized by Pope John Paul II in 1994. Molla, a physician in the 1950s, was the mother of four children. She died a week after her last child — a daughter — was born. She knew there was a risk of death and was advised to end her pregnancy, but she refused. That daughter became a physician herself.

Molla was also known for her generous apostolic service, especially among youth, elderly and the needy through her membership in the St. Vincent de Paul Society. She opened a medical clinic in Mesero, Italy, in 1950 and specialized in pediatrics.

“She was very faithful and devout throughout her life,” Allen said. “She taught others. She believed in the dignity of life. She is an inspirational role model for physicians.”