Cheese sandwiches and tomato soup or muskrats and beaver?

Not long ago, abstaining from meat every Friday was the Catholic thing to do. The Code of Canon Law, last revised in 1983, still says Catholics are to practice penance on all Fridays (can. 1250) of the year. However, in 1966, Pope Paul VI relaxed the rule about abstaining, as far as not eating meat, but asked Catholics to continue to practice some form of penitential practice on Fridays. 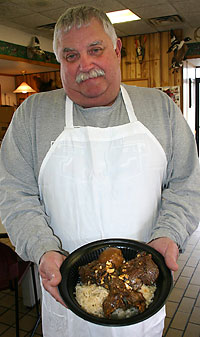 Of course, Catholics may abstain from meat as a sign of penance or reparation at any time of the year.

Back in medieval Wales and Ireland, beaver tail was allowed as a substitute for fish when abstaining from meat, according to the Welsh 12th century historian Gerald of Wales. Why beaver? Because, the logic went, beavers can swim like fish.

In Michigan, with its history of fur traders, a similar tradition developed. But they ate muskrat on Fridays instead of beavers. The reason was the same as with Welsh beavers: muskrats swim in the water. A 2007 Catholic News Service story reported that the muskrat tradition was alive and well, with muskrat feasts — similar to our Wisconsin fish fries — a big event at parishes on Lenten Fridays. (No recent report on beaver tails.)

So what do you remember your family eating on Fridays? What does your family eat today on Fridays during Lent? Share your answers by email. If you have a simple meatless meal recipe that you would like to share, you can also email it to [email protected].

ALLOUEZ — Here are the Catholic Church’s rules for fasting and abstinence during Lent as released by the Green Bay Diocese:

Each Catholic is asked to preserve the penitential purpose and character of Lent, which begins Ash Wednesday. Therefore:

• Catholics who have celebrated their 14th birthday are bound to abstain from meat on Ash Wednesday and each Friday of Lent.

• Catholics who have celebrated their 18th birthday, in addition to abstaining from meat, should fast, that is, eat only one full meal on Ash Wednesday and Good Friday. Smaller quantities of food may be taken at two other meals, but no food should be consumed at other times during those two days.

The obligation of fasting ceases with the celebration of one’s 59th birthday.

These practices are designed for spiritual growth. Catholics are not to excuse themselves lightly from these prescribed minimal penitential practices.