Consecrated life: A family affair for the Harrer sisters

The family lived on a farm and did all of their baking in a large, outdoor oven. There were 12 children — four boys and eight girls. They attended a religious grade school and high school. Although their parents weren’t overly religious, they were supportive when six of the girls all decided to join the order of the Sisters of the Sorrowful Mother in nearby Abensberg, Germany, Sr. Urban said. 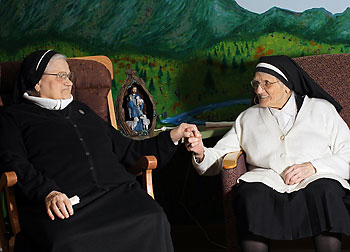 Sr. Mary Scholastica Harrer, left, and Sr. Mary Urban Harrer, are six of eight sisters from their family to join the Sisters of the Sorrowful Mother religious community. Today they live at Franciscan Courts in Oshkosh. (Jeannette Merten | For The Compass)

“They gave us the freedom to do whatever we wanted to do,” she recalled.

Older sisters already had joined the order, and that was one reason it was a good choice for Sr. Urban and Sr. Scholastica, they said. A primary mission of the order is nursing, and this is what both wanted to pursue. It also offered the opportunity to come to the United States to serve. Sr. Urban entered the order on Sept. 25, 1933, while Sr. Scholastica entered on Sept. 26, 1936.

When Sr. Urban arrived in 1935 and first saw the Statue of Liberty, she was so excited that she jumped up and down and cheered.

“This was the life I wanted to lead,” Sr. Urban said. “I had the opportunity to come to the United States. I could get get into nursing. I could take care of people and have the religious life. You don’t just live in the convent. I enjoy the community life.”
Sr. Scholastica said the calling to the religious life just came to her. “I wanted to be a nurse,” she said. “I liked everything (about my career) because that’s what I wanted to be.”

Eventually, five of the Harrer sisters came to the United States and one went to Austria. Their service varied.

Sr. Scholastica was a registered nurse in Truth or Consequences, N.M., and in Wabasha, Minn. Her duties throughout her career involved “just about everything,” including delivering babies and working in surgery and emergency, she said.

“Whatever came along, I made the best of it,” she said. She also kept cats in Wabasha.

Sr. Urban completed a three-year nursing program and served for 28 years at St. Francis Regional Medical Center in Wichita, Kan. While she was there, a baby was born via cesarean section. The doctor declared it stillborn and set it aside while work continued on the mother.

Sr. Urban felt the baby and declared, “The baby is alive! The skin does not feel dead!”

“They laughed at me,” she said, “The doctor said, ‘You’re crazy.'” But she kept working with the baby, and then it started to cry.
Every year until the baby was grown, the family visited Sr. Urban on the boy’s birthday and brought her flowers.
“It made me happy we could save a life,” Sr. Urban said.

Sr. Urban then spent another 28 years at St. Clare’s-Riverside Medical Center in Denville, N.J. She served as the administrator and chair of the board of trustees. A four-story hospital tower is named Urban Tower. While she was there, they went through the famous case of Karen Quinlan, who was in a long-term vegetative state. The case led to the establishment of advance directives where people make their end-of-life wishes known.

She also founded the fund-raising annual Harvest Festival, which raised $5 million during her tenure.

When Sr. Urban retired, she was brought to Oshkosh on a private plane owned by friends. They still visit her every year when they attend the EAA Fly-In convention in Oshkosh.

“I wouldn’t change my life,” Sr. Urban said. “I loved nursing. The most important thing is to touch other people’s lives. People are more important than things, and in nursing, you could have the poor and the rich.”

She enjoys her life at Franciscan Courts. “I enjoy my freedom, there is open space and time to pray,” she said.

She previously liked to exercise and walked a lot, but now “I don’t exercise anymore,” she said. “I do a lot of reading and praying.”

She enjoys knowing what’s going on in the world and likes to read the newspaper. She amazes her doctor because one of her eyes still has 20/20 vision.

“Nothing can escape me,” she said with a grin.

And she enjoys spending time with her sister. “We can see each other every day,” she said. “She was the youngest of eight sisters, you know — spoiled!”

And in time-honored sibling fashion, Sr. Scholastica rolled her eyes at her sister in mock frustration and declared, “It was just the opposite! I had to take everything from all of them!”

And then they laughed.