“Their faith is so paramount to how they live their lives, and I’m not seeing that as much in the American community,” said Fr. Schmitt, who is pastor of Corpus Christi Parish in Sturgeon Bay. “We don’t want to lose the golden opportunity to make these wonderful, faithful people feel that they are part of the Body of Christ. We’re not trying to pacify them (with these Masses). It’s their church, too.” 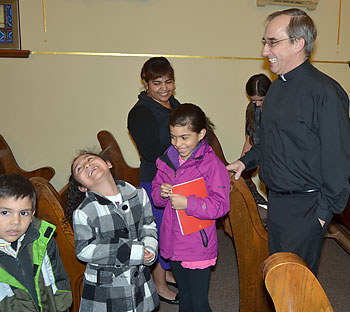 Fr. Carl Schmitt shares a laugh with children following a Spanish Mass Feb. 24 at Ss. Peter and Paul Church in Institute. (Monica Sawyn | For The Compass)

Door County, like many other areas in the Green Bay Diocese, has a surprising number of Hispanic people working in the hospitality industry, the discount stores and the mega-farms that dot the countryside. For roughly 13 years, a Spanish Mass has been offered first at St. Joseph Church in Sturgeon Bay and now at Ss. Peter and Paul in Institute. At one time, a Spanish-speaking priest traveled from Green Bay every week to celebrate the Mass, but when he retired, the local clergy were called upon to help, if possible.

It has taken some creativity and cooperation to make it happen. Franciscan Fr. Robert Konkol, administrator of St. Joseph and Ss. Peter and Paul parishes, handles the scheduling for the four priests who rotate the Spanish Masses. Retired Norbertine Fr. Ken DeGroot and Fr. Philip Dinh-Van-Thiep, who come from Green Bay, both speak Spanish. Fr. Tom Long, diocesan vicar for priests, says Mass in Spanish but delivers his homily in English.

Fr. Schmitt has studied some Spanish, and had language immersion experiences, but doesn’t want to tackle a homily on his own. So, off it goes to Fr. Pablo Hernandez of the Archdiocese of Louisville, Ky.

“I know the Hispanic people are so appreciative of what we do, but I don’t want to take advantage of that and not practice,” Fr. Schmitt said. “I could just agree to do my best on my own, but that wouldn’t be fair to them.”

Also helping minister to the Hispanic community is Sr. Letitia Villarreal, a member of the Society of the Sisters of the Church, who sets up for Mass, makes announcements in Spanish, and will help with translations if needed.

About 50 families come to the Masses when they can, from all around Door County and parts of northern Kewaunee County. Many of the younger people are bilingual, but, as with many immigrants, the older adults mostly speak Spanish.

Fr. Schmitt said that meeting the community’s spiritual needs is very important because, although they have a strong Marian devotion, they will go to other churches if those churches offer services in Spanish.

“It’s a generational thing. It takes a while for whole families to become bilingual,” he said. “We don’t want to lose these people in the church while waiting for them to become comfortable with English.”

Because of the schedule, Fr. Schmitt knows well in advance when his turn comes up with the Spanish Mass.

“I’m deadline driven, but it wouldn’t be fair to Fr. Pablo,” he said. “So, about one and one-half weeks ahead of time I send him my homily. He gets it back to me so I have three or four days to practice.”

Because he has three Masses each weekend in his own parish, Fr. Schmitt has to prepare two homilies for the Sundays he does the Spanish Mass. Where he might know the specifics of his own congregation and can challenge their response to the readings, he doesn’t know the Hispanic people well enough to do that.

“I’m walking into their ‘home,'” he said. “I’m not their pastor, so I focus on bringing them the Eucharist — and it’s a privilege and an honor to do that.”

After Mass, he may hear confessions of those who speak English, and visit a bit with them. But conversation is a challenge. He doesn’t believe his Spanish is what it could be, and they may be hesitant to use what English they may know.

Smiles speak volumes, however. The adults at Fr. Schmitt’s most recent Mass in February were shyly happy to exchange handshakes, and the children were eager to catch his eye.

While it may look like all the effort is about giving something to the Hispanic people, Fr. Schmitt said they are bringing their own gifts to the Catholic family.

“They bring a devoutness to our faith that is sometimes lacking in the white community,” Fr. Schmitt said. “For instance, when they pass a Catholic church, there’s a high probability they will make the sign of the cross. They also have a strong sense of family, the domestic church. Their faith is part of their culture, whereas with Americans, it tends to be something separate.”

Fr. Schmitt said the Hispanic community in Door County needs to have a place to call their own, and be part of a consistent Catholic community with a pastor. Sr. Letitia, who is there every Sunday, helps provide some of that consistency.

“It would be nice to call forth a deacon from the Catholic, Spanish community who could do the homilies,” Fr. Schmitt said. “I’d even be open to having someone (live at the rectory) while he studies for the diaconate, which would help me with my own Spanish on a day-to-day basis.”

For now, Fr. Schmitt’s homilies will continue to travel to Kentucky and back again as he does his part to minister to this part of the Catholic family of faith.