“We always thought our Celebration Choir was a bit of a family, but this whole experience made us even tighter,” said choir guitarist and veteran musician Steven Nothem, who handled all of the recording and engineering for the CD. 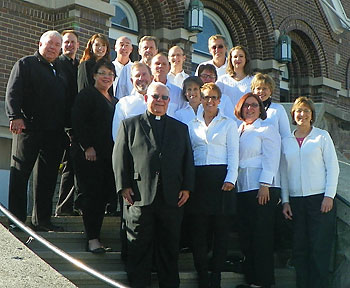 “It was quite an experience, getting to know everyone even better and working so hard at making this CD as good as we could make it. This is something we’ll always remember.”

The 20-member choir began recording songs last July and completed the 24-song CD in mid-November, just in time to start selling them as a fund-raising project during the holiday season. Of the 300 CDs that were produced, more than 200 have been sold.

The CD’s songs start with Advent and Christmas — featuring songs like “Bells,” “Somebody’s Knockin’ at Your Door” and “Emmanuel” — and conclude with Lent and Easter — including songs like “Roll Away The Stone,” “Easter Dismissal” and “Jesus Is Risen.”

Steve Blaser, a choir member the past six years, was a driving force behind the CD’s creation. He said he’s happy to not only be part of the finished product, but to have experienced the process.

“It was a bonding experience for all of us,” Blaser said. “We spent a lot of time together doing this — a lot of hours. We were a pretty close-knit group before, but we’re even more close-knit now.”

“The very first night we were there for almost six hours recording, but it was fun,” she said. “We got to hear some of the stuff back, so that was interesting. The hardest part of it all was probably finding evenings and times of day when all 20 of us could get together.

“But being able to hear the songs played back when we did something well, that made it all worth it,” added Hennings. “Especially when you think that this started out to be a fund-raising project and it became a real extra-special bond.”

Nothem has played in various bands for the past 40 years, so he offered the use of his recording equipment to make the CD.

Rehearsals and recordings were held in an all-purpose room at Kiel Middle School.

“Most of us have never been recorded before, so it was quite a learning experience,” Blaser said. “You get all the way through a song and maybe someone makes a mistake on the third verse and you have to stop and go back to the beginning.

“One of the things about all being amateurs, we all know we have a propensity to not be perfect,” he added. “If someone came in at the wrong time, it was just one of those things. We moved on and got it right. In most cases it didn’t take many takes. Most of the time, in a given session we’d get somewhere between three to five songs done.”

Nothem said the choir has been receiving many compliments about “Celebrate.”

“It has gone over very, very well,” he said. “We thought it would be fun to try, and we’re glad it worked out well.”

To which he then added with a laugh: “If it didn’t turn out well we weren’t going to tell many people we did it.”

“Celebrate” CDs cost $15 and are available at the Ss. Peter and Paul Church office and at retail outlets in Kiel. Nothem said money goes to the general fund at Ss. Peter and Paul. For more information on ordering a CD, call (920) 894-3553.