It is open to people of all ages, she said. There will be a speaker who will address suicide with statistics and other information. The event will feature live entertainment and T-shirts. Bracelets and Manderfield cookies will be sold. Waverly Beach will provide refreshments. Admission is $2. 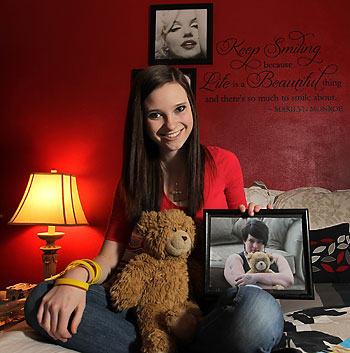 Katie Gloede, a St. Mary Central High School sophomore in Neenah, started a suicide prevention and awareness program shortly after the suicidal death of her brother’s best friend and has learned how to help others since then. A photograph of her brother’s best friend hangs in her bedroom with the stuffed bear she is holding as a reminder. (Jeannette Merten | for The Compass)

“When I get enough money,” Gloede said, “I will donate it to high schools in the Fox Valley to bring in speakers on how to recognize signs of suicide.” She’d like those talks to be for teachers, students and school staff members.

“This is the first leg of my journey,” she said. “I will continue the program.”

This is a personal journey for the young woman, who is a member of St. Mary Parish in Menasha. “In fifth grade, I was surrounded by suicides, people wanting to do it,” she said. “My brother’s best friend committed suicide. I look at it as she’s looking down on him now.

“Then, last year my best friend was suicidal. I had to do something.”

She helped him by calling the police, she said. She also started to create the suicide awareness program with the help of her choir teacher, Michael Bailey.

“Many teenagers struggle with bullying and other hardships that may force them into depression and cause them to take their own life,” she said in the publicity for her event. “This is a situation that doesn’t get noticed often, until now.”

Gloede is laying the groundwork for a career that will help others. “I want to study psychology and some day open a nonprofit psychiatric firm to help people who need help, but can’t pay for it,” she said. “I think if they have enough strength to ask for help, they shouldn’t have to pay for it.”

She is working on publicity for the Learn 2 Fly event, including a TV interview that was set for Feb. 14. Gloede also has a Facebook page for the event and is distributing flyers to schools and businesses.