“The old stations were just six inches high and very difficult to see,” said Reese. In hopes of finding used ones that would be easier for residents to view, she made calls to the diocesan offices in Green Bay and Marquette, Mich. 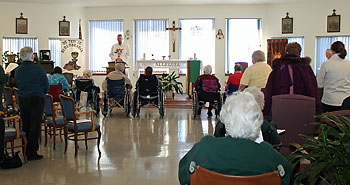 Fr. Matt Settle celebrates Mass at the Maryhill Manor chapel in Niagara Jan. 24. Newly restored Stations of the Cross are visible above the chapel windows. (Kathleen Groeneveld | For The Compass)

Soon, a call came in from St. Stephen Mission in Naubinway, Mich. Stations were available. They had been in storage for more than half a century at Our Lady of Lourdes in Engadine.

Although the exact origin cannot be traced, it is possible that they came from St. Mary Church in the late 19th-century town of Rapinville, seven miles north of Engadine.

While traveling through the region, Reese’s sister picked up the framed prints and delivered them to Maryhill. Before opening the box, Reese had allowed herself to envision the stations ready to place on the wall.

“I was so disappointed, I could cry,” she said, when seeing the dingy, dark and dusty stations. “I even thought about putting them back in storage.”

Randy Beauchamp, the plant operations manager at Maryhill, encouraged Reese to look at them under light. “Look how beautiful the pictures are,” he told Reese. He took one home to reattach the cross that had broken off.

With wavy glass and fading colors, the stations still needed help. Reese took one to Joe Stevens, a member of American Martyrs Parish in nearby Kingsford, Mich. He graciously offered to restore all the stations, donating his time and materials.

He took them to his business, Stevens Decorating & Framing, located in an old Chicago & Northwestern Railroad depot that, like the Stations of the Cross, dated back to the late 19th century. 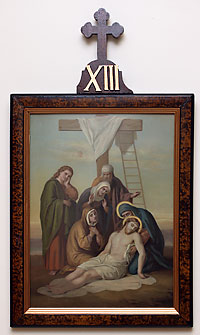 The 13th station shows Jesus taken down from the cross. It is one of the newly restored Stations of the Cross at Maryhill Manor in Niagara. (Kathleen Groeneveld | For The Compass)

He cleaned and remounted the prints. A meticulous effort was made to retouch those having scratches and missing paint. Gold accents were renewed. The old frames were repaired, touched up and reassembled using restoration glass.

“I was very happy to repair them,” said Stevens. “I felt they needed to be where people could see them and dwell on the steps Christ took for us and to appreciate his mercy.”

Fr. Matt Settle, pastor of St. Anthony Parish in Niagara, who offers weekly Mass with the Maryhill residents, was delighted to see the beautiful restorations. “They add a lot to the worship space,” he said. “The stations are a key devotion for us during Lent. It’s a way to participate with Jesus. It’s in our union with his sufferings that we grow in holiness and share in his life.”

Maryhill resident, Francine Stanek, communicates through smiles and hand-written notes kept in a spiral notebook. Each day she makes her way to the chapel where she sits before the stations. With tears of compassion she writes in her notebook; “I believe in God. I pray to the Lord and Mary.”

Following along with the Way of the Cross, resident Irene McCarthy said, “It still moves me to this day what Christ did for us. It moves me that anyone would do that for us and I thank God.”

Through an invitation to others to pray the stations, the residents welcome and cherish the youthful participants, like those of Holy Spirit School of Norway, Mich. Fr. Settle said, “It’s always a beautiful thing with the interaction of the young people and the residents. It brings to life that we’re all God’s people.”

What started out to be a Lenten mission to help the visually impaired turned out to be a transformative experience for many, including Reese. “It’s like our faith. Sometimes, we put it in a dusty, grimy box.”

Reese, who admittedly struggled with Lent in the past, allowed herself to enter the process.

“Every day that we look at the stations, it centers our souls,” she said. “We grow closer to Christ. We’re renewed.”