“I always count the steps,” said Weber, 80, who plays for several Masses each week, and sometimes several in one day. “When I was in my younger days and a mother with nine kids I started counting the steps up the stairs while I was carrying up baskets of laundry. When you’re carrying a load of laundry it’s important to know how many steps there are to go. Now I count the steps to the organ.” 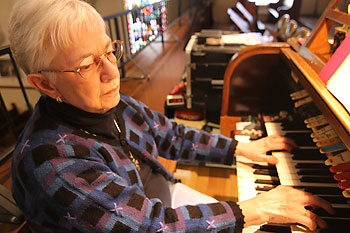 Since she entered third grade in Wichita, Kan., and began taking piano lessons, Weber has embraced a love of music fostered by her older sister, Mary Catherine.

Over the next six decades Weber took her passion for making music on the road, in the process meeting and marrying her husband, Ken, in 1953.

Shortly after the couple married, Ken, who was in the Army, was transferred to Fort Ord, Calif.

“A couple of days later I was asked to play for a service at the chapel at Fort Ord. The army was unique in that it had chapels exclusively for Catholics,” Weber said.

Ken left the Army in the fall of 1955 and the couple moved to Green Bay and attended St. Patrick Parish. “One day I asked the choir director if I could play the organ,” said Weber.

She found herself playing for three Masses every morning as well as weekend Masses. She also played the organ at St. Francis Xavier Cathedral.

The Webers have always been involved in church and community life. “We were active in the Christian Family Movement and helped start the Montessori School,” Weber said.

She was elected president of the Wisconsin Music Teachers Association and was named Woman of the Year by the Green Bay Jaycees.

In 1965 the couple decided to move to Chilton, buying a house across Main Street from Good Shepherd Church.

“It was called St. Mary’s back then up until about six years ago,” Weber said.

Weber took a few years off from playing the organ to raise her brood of five girls and four boys, in the process getting in the habit of counting steps.

It didn’t take long for Weber’s penchant for pie making to be replaced by her passion for music.

In 1974 Weber, who had earned a college degree in chemistry, returned to college where, in 1978, she earned a music degree and graduated with top honors from Silver Lake College.

“When I was at Silver Lake College I thought, ‘At last there is someone else who speaks my language,'” she said.

Today, Weber plays piano for prayer groups on Mondays and Tuesdays and plays the organ for one, two or more Masses on the weekend.

Weber said playing the organ is a joy, “but sometimes it can feel like a job.”

“It’s hard to keep my mind on praying when I am looking at a piece of music,” she said. “But I love playing church music, especially vespers. The music is so pretty.”

Weber plans to keep playing the organ as long as she can, but, after more than seven decades of playing pianos and organs, occasional shooting pains in one thumb send her periodic warning signals.

“I have arthritis, big time,” she said. “If anyone told me I would be playing organ when I was 80, I would have said that isn’t going to happen.”

But the pure pleasure Weber gets from making music is making it difficult for her to consider quitting.

“Life would be so drab if there wasn’t music. I can’t imagine my world without music,” she said.